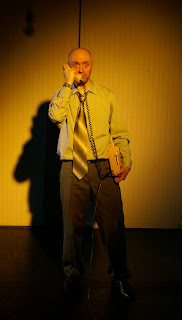 How thankful I am that Aleksandr Vampilov's play Utinaia okhota (Duck Hunting, 1970) has never received its share of critical attention in English-speaking countries. Vampilov (1937—1972), a brilliant half-Buryat dramatist who died tragically young in a boating accident on Lake Baikal, wrote four major plays, of which Utinaia okhota is the most frequently performed. I was lucky enough this week to see a brilliant, emotionally gruelling production of the play at the Vladimir Malyshchitskii Theatre in St Petersburg, under the direction of Aleksandr Klad'ko.

The male lead in Utinaia okhota has an unenviable task: he opens the play while prone on a camp-bed with a thumping hangover, and closes it four hours later, collapsed once more, with his personality unwound at his feet like an empty ammunition belt. For three intense acts, Viktor Zilov (Andrei Shimko) leads us through an out-of-sequence reconstruction of the events preceding his meltdown, then slaps on a disastrous suicide attempt as a real-time epilogue. Much of this time he spends on the telephone, summoning friends or lovers for vodka-sodden revels and brilliantly insincere amours. Vampilov packs the play with premature foreclosures. A double of the son that Zilov's wife Galina (Ilanna Nekrasova) aborts, from despair at his lack of commitment, drifts in and out of the action as a studiedly neutral schoolboy - also named Viktor. The supposed shallowness of male comradeship - amply exposed in the first act by the bad joke of a funeral wreath sent to Zilov by his 'inconsolable friends', and apparently reinforced when Zilov's meat-headed colleague Saiapin sneaks to their boss - is reversed by Saiapin and Kushak's prompt and devoted action when they find Zilov with his rifle in his mouth. We learn, via an agonizing phone call to university admissions, that Zilov's young mistress has abandoned him well in advance of the scene where his drunken bile finally drives her away. The 'duck hunt' of the title represents Zilov's rolling promise to the future, an unrealized but Parnassian expedition to brumous wetlands where life will finally be happy. There is, in fact, nothing wrong with Zilov's life; and that, to paraphrase Wilde, is his tragedy. Utinaia okhota doesn't attempt to explain why certain people are damaged; it doesn't even argue that some people are bad (Zilov is demonstrably a good guy, in as many ways as he is a monster). What Vampilov's play demonstrates, in casual and excruciating detail, is how damaged people destroy others around them. 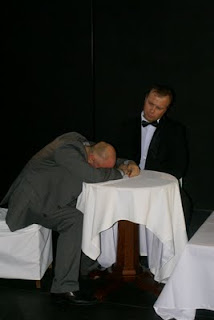 I appreciate Vampilov's neglect (despite existing translations of the play by Alma Law and Patrick Miles respectively) because it's easy to anticipate what critical theorists would do with the strange masculine partnership at the centre of this play between Zilov and the local barman, Dima. Dima is a monkey-suited waiter who takes orders for vodka and shashlyk, and never accepts a drink while on duty; yet, worryingly, Zilov has appointed him the gatekeeper of the duck-hunting paradise, the mentor who authorizes the mystical hunt. While Zilov's relationship with women fluctuates from vicious misogyny to florid uxoriousness, he is always respectful of Dima - except once, when, in a paroxysm of alcoholic nastiness, he calls him a 'lackey'. In Vampilov's text, Dima waits until they are alone, then invites Zilov to repeat the insult and, when he does, hits him in the face. (Zilov, already paralytically drunk, isn't sure this has even happened - and when he forces himself to ask Dima the following day, he discovers nothing). In the play, Zilov's insult becomes the pretext for a bizarre five-minute sequence during which the deadpan Dima tenderly and inventively torments his helpless, semi-conscious friend; an episode which takes their relationship far beyond the merely homosocial towards the homo-erotic. Dima and Zilov are unacknowledged dvoiniki; the sadomasochistic tension between them is never resolved. We don't hear how Dima answers Zilov's final plaintive phone call to his friend, begging to be brought hunting after all. As Alma Law points out in her translator's introduction, this is a play without catharsis. 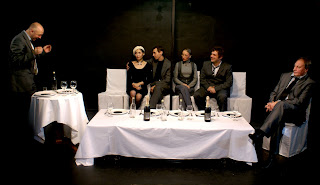 When I googled past productions of the play outside Russia, I came up against this login-protected New York Times review from 1987: 'Sitting through ''Duck Hunting'' is like being in a blind with cold water seeping into your socks.' I'm not sure what direction the reviewer was headed with this, but it doesn't sound as if the performance lived up to what I saw. The Malyshchitskii Theatre is a 'kamernyi teatr', which means that Imelda Marcus has bigger shoe closets. The audience crouches around the action like scouts at a campfire; Zilov's experiments with what we could all see was a loaded rifle were thus particularly hair-raising. By the end of each act the emotional tension, heat, cigarette smoke from the actors, and the sheer CO2 concentration in the air had left us exhausted. Nonetheless, the cast were still dragged back to take six bows. The Malyshchitskii troupe tackled this four-hour drama by acting up to its hilarity as well as its tragedy, with explosive energy, brazen sexuality, disco music, and cheerful anachronism (Dima goes jogging - in provincial Russia circa Brezhnev - with an iPod). Their skills amplify the echoes of Gogol, Saltykov-Shchedrin, and even Sukhovo-Kobylin in Vampilov's work. Duck-hunting versus despair is hardly an original dilemma in Russian literature; I'm reminded of Turgenev's Zapiski okhotnika (A Huntsman's Sketches), where blissful hunting scenes are constantly contrasted with the Ballard-scale car crash of Russian peasant life. Turgenev's 'The Bailiff' ('Burmistr', 1847) is a chillingly dispassionate account of how a sadistic bailiff persecutes individual peasants, secure in the complicity of his self-satisfied master. It ends with the narrator's casual comment 'We went hunting' ('Мы отправились на охоту'). 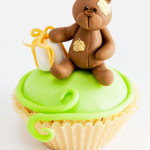 On an unrelated note, I was startled to discover that cupcakes (капкейки), which peaked in the gilded West two years ago, are now snack-de-jour in St Petersburg (similarly, minidresses with leggings). I realize that Russia has historically been a couple of beats behind European trends (look at Romanticism), but I hadn't expected to encounter cake-lag as well - and they're not even ironic about it. This chap is the only bear you're likely to meet in the streets of St Petersburg this time of year.

Posted by Russian Dinosaur at 09:35