I'm currently working on a translation of a 1926 short story called Фантом (Phantom) by the Russian author Sigizmund Krzhizhanovskii. (You can read it in Russian here). Krzhizhanovskii is one of the most obscure and most challenging twentieth-century Russian authors you can choose to read; in fact, his life's work - thousands of pages of unpublished manuscripts - was very nearly forgotten after his death. When researching another writer (Georgii Shengeli), the Russian researcher Vadim Perel'muter accidentally discovered a treasure trove of short fiction, criticism, letters, and even several novellas in the state archive RGALI (Moscow). Perel'muter was intrigued by this unknown yet prolific author's unique style, and has heroically devoted the three decades since his find to editing and publishing Krzhizhanovskii's fiction with extensive annotations. Krzhizhanovskii is an intellectually demanding writer, often referencing Kant, Schopenhauer, Leibnitz and other less well-known continental philosophers; his vocabulary was exhaustive and frankly exhausting, especially for the translator. Joanne Turnbull, Krzhizhanovskii's main English translator, calls him 'an otherworldly man of enormous erudition [...] who was constitutionally incapable of accommodating the coarse commissars of Soviet culture'.  A self-avowed misfit in the grey and forced conformity of Stalinist Russia, Krzhizhanovskii nevertheless wrote with the helpless freneticism of a graphomaniac.  He wrote encyclopedia articles, book reviews, screenplays, even a study on the significance of titles: and meanwhile, he constantly referenced other worlds, Hadean, Stygian, futuristic, hyperborean, transatlantic. Krzhizhanovskii was an admirer of G.K. Chesterton, Nikolai Gogol, Charles Dickens and Jonathan Swift; his work is frequently compared by critics to Borges, Beckett and Kafka. 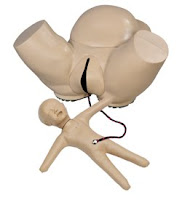 While Квадратурин (Quadraturin) (1926) has become his most frequently anthologized short story (and deservedly - it's a classic of psychological horror), I feel that Phantom is equally terrifying. It's a story that resonates with Mary Shelley's Frankenstein and with the Faust legend (Marlowe's rather than Goethe's) and with Greek tragedy, but it also comes about as close as Krzhizhanovskii ever does to direct historical critique. The word phantom, as the Oxford English Dictionary will tell you, has the additional meaning of 'a model of the body or of a body part or organ, esp. one used to demonstrate the progression of the fetus through the birth canal'. This is the definition Krzhizhanovskii uses to construct his short and horrible tale. In pre-revolutionary Russia, a stressed-out medical student is asked to demonstrate a forceps birth during his final exams. As he manoeuvres the preserved corpse of an aborted foetus through the pelvis of a wooden mannequin, he imagines that the little 'phantom' gives a cry and starts to move. Eventually he persuades himself that he's experienced an hallucination; he forgets the incident and moves far away. The Russian Civil War ensues and, in the midst of its turmoil, the young doctor is confronted by the phantom 'son' he rejected at its birth. Now grown up, the phantom has tracked him down in order to commit an act of quasi-Oedipal patricide - but not before expatiating on its comically grotesque existence as a living corpse. One of the more obvious ironies of the story is that the Russian Revolution is the real 'phantom' child of the story - cynically destroying its human progenitors to prolong its own unnatural existence - and the young doctor's casual creation of a monster is exemplary of the culpable carelessness of other intellectuals of his generation.

In my next blog, I'll talk a little more about the difficulties - and the fascination - of my translation of this Krzhizhanovskii story. While it will be published in due course (probably 2012), the translation is very much a work-in-progress right now.

If you would like to read Krzhizhanovskii's other stories in Joanne Turnbull's wonderful English translations, try either her original collection Seven Stories (Glas, 2006), or her latest, even more rewarding selection, Memories of the Future, published in 2009 by NYRB Classics. (See a review here).
Posted by Russian Dinosaur at 20:34 No comments: