The Kingdom of Agamemnon: In Memory of Vladimir Sharov 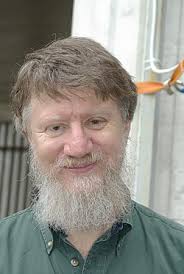 "I am very glad", wrote Vladimir Sharov, who died after a long illness yesterday on 17 August 2018, "that my novel The Kingdom of Agamemnon has been first published in Znamya, a journal which has been important to me in every way and practically my family home.  The novel, part of which (about 150 pages of typescript) appears below, I finished under extremely difficult personal circumstances, but now I feel that this was all to the good for Agamemnon. Difficulty in one's private life readily colludes with the story one is writing; the two find a common language from the first syllable. With this conviction in mind I wrote the final section of the novel and corrected the proofs."

And the novel opens:

I'll begin from the finale, which transformed this story into farce. I might even say, into a shameful farce. The last point has become particularly offensive for me, since the terror ended. Now I think more and more often that what I was involved with, what occupied me for so many years, deserved a different outcome. However, who knows? In the past, in 2015 - I had just returned from an expedition - a friend, deciding that I would be intrigued by it, emailed me a long article from the English magazine Esquire. The article is about one of our spies, active in Argentina from 1968 to 1990. [....] The grandson of Grand Prince Mikhail Romanov, Evgenii, was possibly a bastard - Prince Michael had no lawful offspring; however it is even more likely that Evgenii was just a typical pretender - fled in 1967 from Soviet Hungary to Argentina.

The narrator continues with the exotic adventures of Evgenii in Argentina (first backtracking to describe his birth, his early years in Russia, his mother's grief when he disappeared). By page five I was hooked. But according to the novel's back cover, The Kingdom of Agamemnon is about the life story of another character entirely, and in any case (the blurb promises) this book is vintage Sharov: "unrestrained fantasy and leaps through time, unexpected historical parallels and profound religio-philosophical analyses, large-scale group scenes and the most subtle psychology". Reading a Vladimir Sharov novel is like making your way through the whorls of a sea-shell: once lost in the tunnels, you lose all sense of direction, but the sound of the sea pulls you onwards...

This post was originally to have been called "Rehearsals in Bloomsbury", to mark a fascinating talk at London's Pushkin House in April 2018 by Oliver Ready, Sharov's English translator, about both The Rehearsals (then just out) and Before and During (discussed here on this blog).  I had just finished reading The Rehearsals in Russian and was full of admiration for Oliver's nimble, ingenious, and very naturally styled translation. Both novels, written in the final decade of the twentieth century, are readily comparable, but as Oliver explained that evening, all of Sharov's books are interlinked. Ever since the 1970s, Sharov has been single-mindedly researching his books (just as some of his characters research family secrets), producing one every four or five years, working in national archives and in his Moscow flat. Each book is, in a sense, a rehearsal of the next: Oliver quoted Sharov's description of his own plots as "loving satire", a lovingly satirical work-in-progress to understand Russian mentality and Russian pain. Sharov's father was also a writer; the writer's childhood imagination was shaped by overheard conversations about the Gulags and other Soviet repression between his parents and family friends. Like another contemporary writer I greatly admire, Evgenii Vodolazkin, Sharov still reads Gulag survivors' testimonies. While Before and During explores the cultural currents that led up to the Revolution of 1917, The Rehearsals traces the self-destructive urges in Russian society all the way back to the mid-seventeenth-century Schism in the Russian Orthodox Church, when the Patriarch Nikon forced through radical changes in text and ritual against the will of many, including his former mentor Archpriest Avvakum. Sharov develops Nikon as a brooding, complex, deeply religious and profoundly dangerous character, who all but kidnaps a travelling Breton player, De Sertan, commissioning him to direct and produce a religious mystery play at Nikon's New Jerusalem monastery. But before the "first night" takes place, Nikon is arrested and De Sertan and his Russian players sent into Siberian exile, where they form a unique sectarian community. Not only do they continue rehearsing their mystery play about the birth of Christ for centuries, they live permanently, and pass on to their children and grandchildren, the roles they act - so the community divides into "Christians", "Jews", "Romans", and others. The role of Christ is never cast - Nikon's hope, and the community's unspoken conviction, is that the day the rehearsals are finally complete, Christ will appear and the world will end.

By documenting the evolution of this sect between the 1660s and the 1960s, Sharov models the emergence of dictatorship and dogmatism in this microcosm of Russian society: the community accepts De Sertan's script as literal, divine Truth, but they periodically despair of summoning Christ through rehearsals alone and fall upon each other in cycles of mutual destruction. (I read The Rehearsals at the same time as Jonathan Safran Foer's 2016 novel Here I Am and I was duly baffled by the unintended parallel in their first lines. Safran Foer writes: "When the destruction of Israel commenced, Isaac Bloch was weighing whether to kill himself or move to the Jewish home." The Rehearsals begins (well, its second paragraph begins): "In 1939, Ivan Trofimovich Kobylin ceased being a Jew, and the Jewish nation, of whom he was the last, ended with him [my translation]." Both books presuppose a post-Jewish world, from very different perspectives.) I won't go into detail here on the extraordinary arcs of upside-down-thinking engaged in on both sides to provoke and justify internecine slaughter, but clearly Sharov has a gift for exploring the pain of a nation often torn by antisemitic and interreligious persecution. He leads the reader to empathize with entire groups (for example, with the "Jews" who persecute "Christians" in order to invite the process of revenge persecution and extirpation which will supposedly expedite the Second Coming) even more than with individuals, although the plot unwinds through a labyrinth of interconnected lives. Like Before and During, where a cast of fantastic survivals commit mass murder in firm expectation of an apocalyptic flood (which never happens), The Rehearsals ends (and begins) on an aporic note. The "Jewish nation" has died out, but Christ has yet to appear to those Chosen.

Sharov loves to thematize translation, as Oliver noted: De Sertan's diary is translated from Breton into Russian; it is destroyed, memorized, and re-copied; the words of the Bible is translated into daily ritual, and history is translated into different conceptions. Oliver described the difficulties of translating Sharov's long, rambling, never quite disorganized sentences into English, often sending questions to the writer (relayed by Sharov's wife, Oliver Dunaevskaya, as the former preferred to avoid email) to clarify religious or stylistic nuances. On one occasion they even visited the site of Nikon's New Jerusalem monastery together, which must have been an intriguing experience (ah, to have been a pterosaur on the wall). Oliver is not only Sharov's translator but a literary scholar who has written illuminatingly about Before and During as a '(failed) experiment in "literary therapy"' and 'the outstanding Russian "madhouse" novel of the 1990s' in his monograph Persisting in Folly: Russian Writers in Search of Wisdom, 1963-2013.

I was privileged to meet Vladimir Sharov when he visited Cambridge a few years ago. He was undoubtedly a profound and talented writer, but he was also a modest and approachable human being, with a twinkle in his eye. We will keep reading and re-reading his books - and treasuring the twinkle.

You can read a Russian-language extract (cited above) from The Kingdom of Agamemnon here, and extracts from two of Sharov's other novels here. Светлая память! 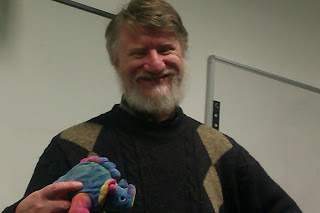 Posted by Russian Dinosaur at 15:00

Labels: Before & During, Oliver Ready, The Kingdom of Agamemnon, Vladimir Sharov