If It Squelches Like A Snipe, It's... Anna Karenina

2014 will witness a high-tension face-off between two competing purveyors of Russian culture. No, they're not overpriced coffee franchises, Kofe-Haus and Shokoladnitsa; they don't involve any part of Pyotr Pavlensky's anatomy; and they certainly aren't Putin and Medvedev. In autumn 2014, Oxford and Yale University Presses will launch new translations of Tolstoy's Anna Karenina by translators Rosamund Bartlett and Marian Schwartz respectively. You can admire both books' websites here and here. (Not that the Dinosaur is prejudiced, but Rosamund Bartlett's version is already available on Kindle).

While I look forward to a readathon with both translations in the near future, I already enjoyed a direct introduction to Rosamund Bartlett's when she spoke at the University of Exeter's humanities seminar last month. Rosamund has been working intensively on Anna for the last three years, ever since finishing her 2010 biography of its author, Tolstoy: A Russian Life. When she spoke to us, she was less than 24 hours away from her final proofs check (and able to reveal the cover image, pictured right, a portrait of the British artist Louise Jopling; entirely unrelated to Anna, although Jopling did have three husbands). From that unique perspective, Rosamund shared many of her insights and discoveries about Tolstoy, who is virtually a member of her family by now, and also about his translators. I was fascinated to learn just how many translators Anna Karenina has had, from the Harvard graduate and fellow Tolstoy biographer Nathan Haskell Dole in 1886, to the extraordinary story of Kirill Zinofieff's and Jenny Hughes' collaboration on their 2008 version, which Zinofieff had begun and abandoned over half a century previously with his late wife, the translator April FitzLyon. Zinofieff was 98 and clinically blind during the manuscript revision for Oneworld Press; his friend Hughes, knowing no Russian, learned the Cyrillic alphabet in order to be able to 'read' the Russian original aloud to him word by word (this podcast gives their story). Intriguingly, of the 13 separate translations to date, three were produced wholly or partly by husband-and-wife teams - a useful reminder that the original Anna, scrawled by Tolstoy and fair-copied by Sofia Andreyevna, was also a product of conjugal teamwork. Perhaps the message is that you don't have to be married to translate Tolstoy, but it helps?

Here, with Rosamund's permission, is the family tree of Anna Karenina's Anglophone translators:


Rosamund's talk also threw light on the degree of finesse required to translate Tolstoy correctly - a quest for accuracy that, in the past, has drawn her into correspondence with beekeepers and birdwatchers. She drew our attention to a short passage from Levin's snipe hunt in Part 6, Chapter 10 of the novel. Here the sticking point, or rather squelching point, is the precise sound made by a snipe flushed by hunters. Russian possesses the onomatopoeic verb chmokat’ for this phenomenon (social butterflies will be familiar with the throaway endearment chmoki, meaning 'kisses' in the sense of lip-smacking - rather like the English air-kiss 'mwah').  The problem is that Tolstoy uses exactly the same verb to describe what Bartlett calls 'the sucking sound made by Levin’s heel as he extracts it from the bog', thus emphasizing Levin's temporary confusion between his own noise and the bird's alarm call. Previous translators have exerted themselves to find a suitably onomatopoeic verb for the snipe's call plus a completely different verb for Levin's boot, thus losing Tolstoy's deliberate ambiguity. Here is the original passage:

The dogs were getting nearer and nearer, keeping out of each other’s way as they followed their own trail: the expectation of snipe was so intense that Levin thought the squelching sound of his heel as he pulled it out of the bog was the call of a snipe, and he clutched the butt of his gun and held it tight.
‘Bang! bang!’ rang out above his ear. It was Vasenka shooting a flock of ducks that had been circling over the marsh and just then flying towards the sportsmen far out of range. A snipe squelched before Levin had time to look round, followed by a second and a third, and then about eight more rose one after the other.
This is Constance Garnett's version:

the expectation of snipe was so intense that to Levin the squelching sound of his own heel, as he drew it up out of the mire, seemed to be the call of a snipe... Before Levin had time to look round, there was the whir of one snipe....

And here are the Maudes, Rosamund's immediate predecessors at OUP:

the expectation of snipe was so intense that the squelching sound of his own heel, as he drew it out of the rusty mud, sounded to Levin like the call of a bird... Before Levin had time to look round, he heard the whirr of a snipe...

And finally the formidable Pevear and Volokhonsky:

the expectation was so intense that the sucking of his own boot as he pulled it out of the rusty water sounded to Levin like the call of a snipe... Levin had barely turned to look when a snipe creeched...

This goes to show that translators can try too hard and, by their versatility, impede the flow of their source texts.

The Dinosaur wishes Rosamund Bartlett and Marian Schwartz well with the imminent launch and promotion of their books, and looks forward to reviewing both by Christmas. Two Tolstoy 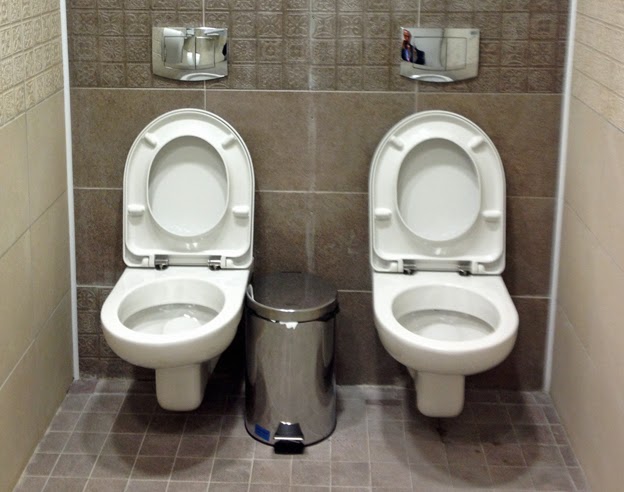 translations, tandemocracy... well, it's been clear ever since Sochi that Russian culture emphasizes doing important things in pairs.