The conference of the American Association of Teachers of Slavic and Eastern European Languages (AATSEEL) was held this year in Seattle (it shadows the MLA conference wherever the latter goes), or more accurately, in the suburb of Bellevue, at a respectful distance from the city centre, which the MLA had reportedly booked solid. On display were magnificent lions... slow and subtle hippopotami... a white elephant or two - and that was just from my trip to Seattle's Woodland Park Zoo, before the conference proper had started! The best part of AATSEEL is its vibrancy and reciprocity; instead of keeping the scholars in their cages, so to speak, this event releases them to roam. Flocks of graduate students gambol on the veldt around grazing emeriti, while assistant professors hunt in packs for tenure. Scholars at every stage of their careers organized other scholars - at every stage of their careers - into panels, workshops, and seminars, for the benefit of everyone else. Eric Naiman led a seminar on reading Nabokov too closely, wryly (but proudly) admitting that his own peers accuse him of reading too imaginatively; Boris Gasparov swam with dolphin-like glee through a two-hour session on Pushkin's inheritance from German Romanticism; and Donna Orwin and Caryl Emerson kept popping up during critical theory panels to renew a polemical exchange they non-vituperatively described as a thirty-five-year argument. A great pleasure of the conference, for me, was this opportunity to marvel at senior North American scholars in their natural habitat. A Princeton student called Anna Berman nobly organized a sequence of coffee sessions with 'leading scholars', open to all, which gave us the opportunity to listen to people like Robin Feuer Miller discussing her non-traditional road into Slavic studies (via a degree in English, and a family affection for Tolstoy), or Donna Orwin explaining movingly how her son's enlistment inspired her current interest in molodichestvo, the glamorization of military valour in Tolstoy and other nineteenth-century writers. Keynote speeches are rarely funny, but Irina Paperno's deadpan delivery as she described moments of bathos in Tolstoy's life - and her powerful insistence that his philosophical writings are more relevant than ever today - held her audience entranced for an hour.
Highlights of my conference were the interview tips workshop on the first evening, followed by an encounter with the great (and modest) Don Livingston of Russian Word of the Day fame; Don's blog has been poised on the word вымя (udder) for much too long, and I urged him to put the diurnalness back in his diary. I also enjoyed my first ever poetry translation workshop, led by Sibelan Forrester of Swarthmore College, which featured new work and hot-off-the-press translations by Maria Rybakova and Maria Khotimsky, Rafael Levchin and Olga Livshin, Evgenii Slivkin and Margo Rosen, and Iulia Nemirovskaia and the very talented Boris Dralyuk. Maria Rybakova's new poetic biography of Gnedich, shortlisted for Russia's NOSE book prize (see here for the full shortlist) and excerpted here, intrigues me particularly. Rybakova's Gnedich is enriched with notes from the poet's own diaries and from his translation of Homer's Iliad (written, Rybakova explained, in awkward, neological Russian, to reproduce the effect of Homer's awkward, artificial Greek); the passage we read described the madness of the poet Batiushkov, imprisoned in a German asylum and hallucinating angels. Let's hope that the NOSE judges reward her work. As for the panels themselves, the intellectual standard was daunting, and there was a real wealth of topics, including several with which this blog has previously flirted; I sadly missed an intriguing paper on Vampilov to hear another on Mamin-Sibiriak's 1899 novel Падающие звезды (Shooting Stars) in the context of ekphrasis. At the very end of the conference, I had yet another great Slavist-crush moment when I bumped into Liuba from The Possessed, whom hardcore Batuman readers will recognize as the mastermind behind the Lazhechnikov chapter. 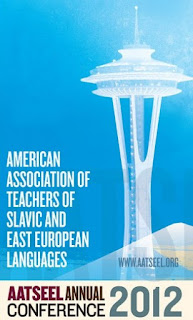 Some delegates complained that that we weren't really in Seattle at all, and that the organizers had duped us by enticingly printing the city's famous Space Needle on the cover of the conference programme. Perhaps this was in fact a cunning plan to remove the temptation of tourism. If so, the tourism we did manage to sneak in became all the more compelling. Mount Rainier, shining in Parnassian splendour, glimpsed from the 550 bus while a nice crazy lady described my aura to me; the gorgeous woods and waterways of the Pacific North-West; rides on the 1962 World Fair monorail; and a delightful Pearse McGarrigle moment in Starbucks off Pike Place Market (where else), overrun by overexcited MLA presenters. Perhaps it was just as well we Slavists were semi-exiled; Friday afternoon's combination of panels on Dostoevsky, Ismail Kadare, Ukrainian feminism and Upper Sorbian causative relations caused a power surge that almost blew the lights in the conference hotel. If we'd managed a day trip to Mt Rainier, God only knows what we'd have done to an active volcano.

Posted by Russian Dinosaur at 23:56