Over the Precipice with Cardinal Points

I rashly promised a review of Volume 8 of the literary journal Cardinal Points. This issue is edited by Boris Dralyuk and intriguingly dedicated, like the previous seven, to "DeStalinization of the Air". Here are my impressions of my first real Cardinal Points experience, greatly facilitated by the ease of downloading the journal issue to Kindle at minimal cost. The pagination isn't pretty, but the selection of translated prose, poetry, and ruminative essays more than makes up for this shortfall.

First revelation: exciting translations of forgotten works by two outstanding Russian emigre authors, Yuri Felsen (pen name of Nikolai Berngardovich Freydenshtein) and Vasily Yanovsky (two short stories translated by Yanovsky's wife, Isabella Levitin). Cardinal Points 8 features an extract from Felsen's novel Deceit [Obman], 1930, translated by Bryan Karetnyk, who is himself a former guest on this blog and has recently published yet another volume of Gazdanov in translation. Yanovsky, one of the great Russian tradition of writer-doctors, is represented by two short stories translated by his wife, Isabella Levitin; both Yanovsky and Levitin were friends of W.H. Auden.

Even without having read Felsen's original, I take my hat off to the fiendishly complex prose mastered by Bryan in, for example, the following lines, where Deceit's protagonist Volodya writes about his quest to find the perfect woman:


I have always wanted not only to become a support, but also to find a support - a friend, an opponent, an intellect, a force - and not on account of weakness, but rather because of some (granted, inconspicuous, not even wholly intentional) hubris, so that there come about a fascinating, daring contest, a comradely and romantic union, on equal terms, instead of a swift and foolish takeover, so that my partner already be on the same spiritual plain [sic?], rarely attained by women [thanks, Nikolai Berngardovich!], when everything dignified and precious, everything characteristic of love - mutual reliance, ennoblement, support - becomes, for both parties, deserved and assured. Such emotional depth in women, one that rivals my own (or that which I ascribe myself), is the vestige of experience, struggle, happiness and failure, and is in no wise the result of a miracle.

Unexpectedly, by the end of the extract, Volodya seems to have found himself the perfect woman - the lovely and forthright Lyolya. Can it last? We'll have to wait for Bryan to publish his translation of the full novel, or else find the Russian original. Sadly, for all the sparkle of his prose, Felsen's life was tragically cut short. Yanovsky enjoyed a much longer span: his two stories published here are entertainingly diverse. The first describes the personalities of mutinous nurses in a hospital ward, while the second, "The Adventures of Oscar Quinn", is a science-fiction fable about the lost continent of Atlantis which reminded me of Wells. In non-Russianist news, I also enjoyed the extract from Romanian author Delia Radu's contemporary novel The Book of Becoming Mothers.

While I won't comment on the poetry translated in this volume (dinosaurs should stick to prose), my second revelation was Maria Tsvetaeva's drama Fortune (Fortuna, ), translated by Maya Chhabra. I did not know that Tsetaeva had written a play (in fact, she wrote at least three verse plays); this one retells, in five colourful episodes, the life of Armand-Louis de Gontaut, Duc de Lauzun (later Duc de Biron and generally known as Biron, 1747-1793). Lauzun is remembered for commanding a French Legion alongside George Washington in 1781 during the American War of Independence; Tsetaeva, however, is more interested in her hero's emotional development, specifically his dalliances with beauteous Polish princesses, his platonic relationship with Marie-Antoinette, and a flirtation with the jailer's daughter on the very day of his execution (I briefly hoped she was going to dress him up as a washerwoman to help him escape, but Lauzun was no Mr Toad).

For me, the final revelation was Stephen Pearl's humorous and interrogative article about his translation of Ivan Goncharov's 1869 novel Obryv, always known in English as The Precipice. Pearl has taken the radical step of re-naming the novel Malinovka Heights. His title is chosen in order to retain the thematic centrality of the obryv in question, while avoiding the vertiginous connotations of the usual translation. Obryv, Pearl tells us, has the double meaning of "bluff" (in the geographical sense) and "rupture" or discontinuity, which is of course why Goncharov used this word to name his love-story-cum-novel-of-ideas. What's more, the bluff in question, on the estate of Malinovka (modelled on an estate in Goncharov's home town of Simbirsk) is a far from precipitous slope above the Volga - and Pearl includes a photo as proof! Elsewhere in this ruminative piece, he discusses translation problems peculiar to Goncharov's novel: the promiscuity of "passion" (strast') experienced by the protagonist Raisky, and how literally the word should be translated; similarly, how to deal with a superabundance of diverse relatives known casually as "cousins"; and also a problem familiar to readers of the Dinosaur: the issue of adjectival false equivalents. (I discussed different approaches to this problem in recent translations of Anna Karenina here.) The Russian language, Pearl reminds us, uses intensifiers like "strong" much more frequently than English as both adjectives and adverbs; and clearly it would be silly to take these too literally by translating a sil'naya prostuda as a "strong cold" rather than a "heavy cold". But what to do when these problems emerge on the narrative plane? Pearl notes that when Goncharov's characters lapse into silence, which they apparently quite often do, they never lapse silently; they always lapse zadumchivo (pensively) or tikho (gently) or fall into razdum'e (rumination). If a translator renders each of these oft-repeated qualifiers punctiliously, inevitably the reader gets the impression that all 19th century Russians were thoughtful, pensive, calm, and, well, ruminant. Yet arguably this is a false impression; these decorative adjectives would have been transparent to the contemporary Russian reader, who would ignore them as merely more of Goncharov's characteristic "purple prose" (which Pearl discusses separately). The modern Anglophone reader is unlikely to be privy to this sort of narrative code and therefore takes it on trust that the folk of Malinovka Heights were an exceptionally reflective bunch. Should the translator, therefore, act as code-buster?

I'll be buying Cardinal Points on Kindle again, but I wish that the other journal I want to mention, East-West Review, were as easy to access. East-West Review is the official journal of the Great Britain-Russia Society, but it's currently print subscription only. In the latest, Autumn 2018 edition, Michael Pursglove has an interesting piece - part of an informal series about obscure translators - about the only known translator of Obryv into English, at least pre-Pearl: the mysterious M. Bryant. If you look up The Precipice's Wikipedia entry, you'll see that M. Bryant's translation gets pride of place; yet Pursglove warns us that it's incomplete - very possibly because it was a translation, and occasionally a mistranslation, of an equally incomplete German version which appeared in 1896 from the pen of one Wilhelm Goldschmidt. Pursglove proposes that Marguerite Bryant (1870-1962), a well-known British novelist, may have pirated Goldschmidt's Der Absturz for Hodder & Stoughton in 1915. This kind of indirect translation, via an intermediate language, was quite common at the time. So we can very probably blame Marguerite Bryant, who also gave the world The Dominant Passion and Christopher Hibbault, Roadmaker, for turning an unassuming hilltop above the Volga into a dizzying precipice. The titular misfortunes of Goncharov's novel don't end here: one French translation rendered Obryv as Marc le Nihiliste, while a Belgian newspaper re-named it La Faute de la Grand-mere (Grandmother's Mistake)! 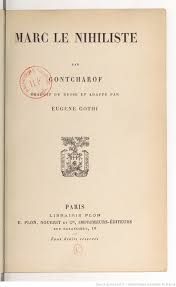 Disclaimers: On realizing that Bryan Karetnyk had published The Beggar and other stories, I promptly ordered a copy... this blog still owes Pushkin Press and Bryan a review of The Buddha's Return. It's in the pipeline...And while Stephen Pearl's Malinovka Heights is still forthcoming, you can buy his translations of Goncharov's other two novels here.

Posted by Russian Dinosaur at 15:49