A Hitch-Hiker's Guide to Siberia: The Road Is Always Right

I approached Off The Beaten Track: Stories by Russian Hitchhikers (Glas, 2012) with a jaundiced eye. Hitch-hiking has never given me a spiritual thrill; at college, I was never the kind who thumbed from Killorglin to Casablanca and back for charity in Rag Week. Where I grew up, hitching was an uninspired thing you did if you didn't have a car, a bicycle, or a blood relative to give you a lift. Now hiking without the hitching is a vastly different matter, and I'm with Frodo Baggins on the romantic appeal of the open road:


The Road goes ever on and on
Down from the door where it began...
But I digress. Off The Beaten Track collects two novellas by Igor Savelev and Irina Bogatyreva, plus a travelogue by Tatiana Mazepina, all rendered in English by different translators and all sharing a remarkably similar travellers' ethos. In Bogatyreva's words:
'We are footloose and fancy-free wayfarers on roads without end, friends of long-distance truckers and drivers, their amulets, talismans, their guardian angels. Even the cops leave us alone. [...] We are legion, dots scattered along the road, romantic followers of our guru Jack Kerouac, members of the same mendicant order, and the motto on our crest could read In via veritas or, more simply, "The Road Is Always Right"' (p. 78, trans. Arch Tait).

By the end of this paragraph, I was wondering whether Russia is doomed forever to seize upon Western cultural trends several decades after they've fizzled to ironic extinction, and whether Kerouac's fuzzy philosophy ages as well as Romanticism or, say, Fourierism. Nor was I reconciled as I followed Bogatyreva through her autobiographical odyssey: from an overcrowded commune in Moscow, past the industrial cities of the Urals and the sunny roadsides of the South, to a mystical rendezvous with some highly self-regarding but rather dull individuals in a Siberian forest. And back to Moscow. But Bogatyreva isn't trying to win over her audience. She gives a penetratingly vivid picture of the frustrations of late-night hitching on the capital's ring road, the discomfort of days without a wash or a proper meal, the tensions and mismatched copulations that flourish in the apartment benevolently overseen by her Rastafarian landlord, Roma Jah. She exposes both her own naivety and her determination to realize her dreams, fully aware of their bathos: whether by discovering a lake in the mountains, chanting an invocation to a magical, half-feral raven, or not quite falling in love with dreamy-eyed backpacker gurus (such as Grand, her long-distance travel mentor). Arch Tait has coped admirably with trendy slang (I loved his translation of Bogatyreva's nickname, Melkaia, as 'Titch') to capture her unsparingly honest directness. Nonetheless, I found her short story Pristup (The Seizure), which I read in the original Russian here, much more convincing in terms of both style and narrative. The theme and setting (thumbing a lift) were identical with Off The Beaten Track, yet her tone had gained maturity and depth (the female narrator pretends to be a witch to discourage an over-affectionate trucker, but her successful impersonation frightens him into a heart attack). I loved her insight that the truck driver would rapidly forget the entire incident, despite the intensity of his terror: 'I sensed that everything that happened the previous evening had slid from him like water off a duck's back. It was difficult for his sturdy, working-man's brain to accommodate changes. I let slip the reins I had seized the day before, comforting myself that there wasn't much further to go' (my trans.). This sort of casual but meaningful emotional commentary is missing from Off the Beaten Track, where all the actions and personalities are served up raw.
You can read Off the Beaten Track (in Russian, Avtostop) here.
Lizok of Bookshelf fame has reviewed Bogatyreva's other fiction appreciatively (and also met her several times). I too met Bogatyreva briefly this year during her world tour as a Debut Prizewinner, and we established that we knew each other vaguely from student days in Moscow's Gorky Literary Institute... although, back then, she never invited me to hitch to Siberia. I suppose I didn't look the type. 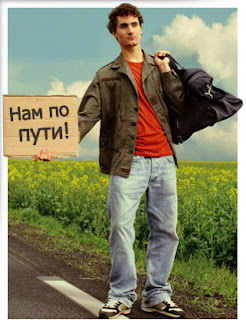 Meanwhile, shorn of philosophy, Igor Savelev's 'The Pale City' trails four young people to an accidental meeting in a shabby apartment in Ufa. Three hitch-hikers, one soon-to-be conscript, a beautiful girl with a troubled past, a lightning love affair, and a broken nose - all of late adolescent life is here, especially one character's reflections on how adulthood means no longer going commando. In Tatiana Mazepina's 'Traveling to Paradise', hitch-hiking becomes a deliberately spiritual strategy, a way of expressing trust in the divine plan while experiencing new cultures to the full (none of Bogatyreva's diffuse neo-paganism here). On her month-long journey through Turkey, Syria, Jordan, and Egypt, Mazepina encounters numerous Orthodox communities and benefits repeatedly from the kindness of strangers. Occasionally, I found her determined enthusiasm grating (at dinner with a Turkish Muslim family: 'the conversation itself was the main dish, a delicacy that we cannot get enough of', p. 234), but when she manages to resist naive metaphors, Mazepina's sense of wonder becomes infectious. In the Holy Lands, drivers don't just give you a lift, they take you home, introduce you to their families, feed you, give you a bed for the night, and even continue to send you anxious text messages for the rest of your travels. The scenes from Syria were, in view of current events there, especially bittersweet.
With thanks to Natasha Perova of Glas Publishing for sending me a review copy.


Russian Dinosaur is taking a few weeks' vacation, but expect my next post to report on August's International Tolstoy Conference at Yasnaya Polyana... provided OVIR agree that extinct reptiles need visas too.