One of my students has revealed himself as a secret follower of Dmitrii Narkisovich Mamin-Sibiriak, one of the almost-forgotten second-rank classic novelists of the nineteenth-century Russian canon. Undeterred by Mamin-Sibiriak's peculiar names and marginal status, my student dedicated his year abroad in 2009-10 to completing original research from the writer's books, archives, and even his dom-muzei (in Ekaterinburg). Equally undeterred by my confessed unfamiliarity with Mamin-Sibiriak, he has asked me to supervise his essay, which will combine biographical survey with literary analysis and historical contextualization of Mamin-Sibiriak's most successful novel, Privalovskie milliony (1883), an account of a factory owner with philanthropic tendencies who attempts to effect positive socio-economic change in a provincial Russian town.

Mamin-Sibiriak (the extra surname was an addendum he earned in his earlier years as a radical journalist, when he often signed articles with the pseudonym Sibiriak) was born near Perm in 1852, into a priest's family. He was educated in Perm and Ekaterinburg, and briefly in St Petersburg, but returned to Ekaterinburg where he established his literary career. After Privalovskie milliony brought him a degree of fame, he became acquainted with other major writers of his time, including Korolenko, Chekhov, Gorkii and Bunin. He married a famous actress and moved back to St Petersburg after their marriage; sadly, she died shortly after giving birth to their daughter. Dmitry Mamin-Sibiriak died in St Petersburg in 1912. Lenin and Gorkii both reviewed him favourably, but (according to my student) he was ignominiously trashed by Stalinist critics, ushering in a long period of eclipse. 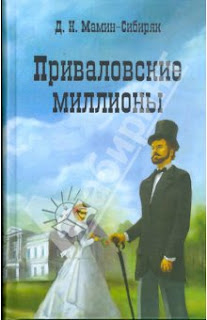 And that's really all I know about D M-S at the moment: I'm looking forward to reading my student's extended essay next month on this most famous son of Perm (although Perm was known as Molotov between 1940 and 1957, after Stalin's infamous diplomat, Molotov wasn't actually from there). Perm is certainly starting to loom larger in my own life as I am meeting an unusual number of academics from Perm University; at a conference in Sheffield recently, I heard a very entertaining paper by Galina Yankovskaia about 'Permistics' - Permians' belief that their region is the centre of the world (after all, they did have their own geological epoch, even if it's best known for the greatest mass extinctions the world has ever seen). In any case, I have found myself promising to read Privalovskie milliony over the Christmas break, not simply out of a sense of duty to my student, but also because I can never resist an obscure, neglected author. I will blog again in a few weeks about my impressions of Mamin-Sibiriak's novel. (You can read my student David Ellard's thoughts on Mamin-Sibiriak here, in a later blog post).

Incidentally, the poet Bella Akhmadulina passed away today, aged seventy-three. I'm barely familiar with her work, but this obituary in Kommersant is a useful summary of her career.


Picture credits for most of the images in this post are owed to Allerleiten.
Posted by Russian Dinosaur at 00:29 3 comments:

This blog marks a departure from my translation theme, but also my return after a long silence caused by work obligations: my new job in Oxford is wonderful, but very demanding of my time. Half-completed translations languish in remote computer folders, waiting for the Christmas holidays to start.
One hundred years and three days ago, Lev Nikolaevich Tolstoy departed this world - famously, in a railway station in Astapovo, a small railway junction near the border of the Kaluga and Smolensk provinces. He had been on his way in the general direction of the Caucasus - final destination unknown - when he developed a high temperature which eventually became a fatal case of pneumonia. He was eighty-two.

I plan to mark this occasion by inviting my students and colleagues to view a screening of the film The Last Station (Michael Hoffmann, 2010), which is based on a novelisation of the last year of Tolstoy's life by Jay Parini, an American Professor of English. Parini based his story on close reading of the many diaries and letters left by Tolstoy and those close to him in his last year at the family estate of Yasnaya Polyana: and they were quite a crew. Tolstoy's intimate circle included his wife of forty-eight years, who had borne him thirteen children over the course of their stormy marriage, taken down drafts of his major writings, and even held power of attorney over his possessions, Sofia Andreevna; their eight surviving children including Sasha, the youngest daughter, who was dangerously resentful of her mother; Vladimir Chertkov, a passionate Tolstoyan who venerated Tolstoy as much as he despised the great man's family and wealth; and Valentin Bulgakov, a newly appointed private secretary, William Shirer's 'ubiquitous Bulgakov', who chronicled the last months of Tolstoy's life with a sympathetic but penetrating eye. It was a group doomed to constant and humiliating strife: tantrums, quarrels, secrecy and even suicide attempts followed one after another. As A.N. Wilson wrote in his biography of Tolstoy, 'The last years of Tolstoy's life were scandalously horrible - this unedifying series of horrible disputes and emotional disruptions... [Tolstoy's] odious, humourless disciples'.
Like the book, the film is largely historically accurate; Helen Mirren's enthusiastic portrayal of the half-crazed, half-desperate Countess Sofia redeems Parini's slightly unsympathetic portrayal of this loving wife doomed to go down in history as Tolstoy's Xanthippe. All she wanted to do was protect her husband's royalties so that her children would inherit them - Tolstoy and Chertkov were constantly revising her husband's will in the hope of placing all his work in the public domain. As she wrote in a defensive letter to Chertkov's mother, " No-one has the right to interfere in the relations between husband and wife. I helped him and lived one life with him, soul to soul." After her husband's death, from which both Chertkov and her family succeeded in excluding her almost completely, the Countess entered upon and eventually won a bitter legal battle against Chertkov for control of her husband's copyright. The victory was little more than moral, however - the case was closed in 1913, and four years later the Revolution would abolish private property.
One point the film does completely invent is the existence of Valentin Bulgakov's love interest, "Masha", played by the Tipperary actress Kelly Condon. Masha is a Tolstoyan who feels out of place in the 'odious, humourless' Tolstoyan commune at Telyatinki, Chertkov's estate near Yasnaya Polyana. She sets out to seduce the ingenuous private secretary, who is a vegetarian and a virgin. She succeeds with remarkably little trouble; Bulgakov finds himself awoken to love and increasingly resistant to the dry utopianism of Chertkov and his ilk. The historical character of Bulgakov, who remained a sincere and prolific Tolstoyan propagandist all his life, is unlikely to have undergone such a conversion. He spent most of his life as an emigre in Europe, remaining true to Tolstoyan principles of chastity and fraternity, eventually returning to Russia in 1948 to live out his remaining decades as curator of the Yasnaya Polyana museum. The film's epigraph, "All that I know I know only because I love", and ascribed to Tolstoy, is more accurately placed in the mouth of Tolstoy's character, Prince Andrei Bolkonsky of War and Peace, reflecting on his death-bed after a life spent largely without love. Of course, this huge novel was completed in 1869, a time when Tolstoy was remarkably more cheerful and sanguine about love's place in the world. The later Tolstoy explored the darker side of love in Anna Karenina and The Kreutser Sonata. It might have been more appropriate to choose the epigraph from a 1917 essay by Bulgakov called 'A Christian Ethic', in which the still-young man wrote, 'True life is granted to man under two conditions: that he do good to others and that he increased the strength of the love that lies within him". Whether any of the characters in 'The Last Station' succeed in fulfilling Bulgakov's conditions, I leave it to my viewers tonight to decide.
Posted by Russian Dinosaur at 15:42 1 comment: