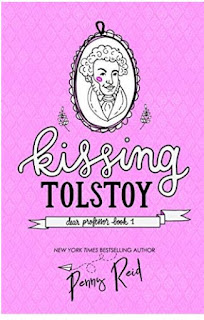 Regular readers will appreciate that although my posts are often pretty highbrow, I'm most interested in how what's currently perceived as "high culture" gets recycled by so-called "low culture". Hence I've blogged about Poldark and the Brothers Karamazov; why James Norton doesn't speak Russian; and even about how the BBC uses Great Russian Novels to finger TV villains. There is, however, endless fun in exploring how one of the lowest genres of all - so low you need a bathysphere for access, or at least a bath with lots of scented bubbles and pink prosecco - interacts with classic literature. I have in mind, of course, the Adult Romance. Readers, I give you Penny Reid's Kissing Tolstoy.

Fear not, this is no 19th century kiss-and-tell. Tolstoy's presence in the story is purely vicarious (and to judge by the front cover illustration, he's probably Pushkin, anyway). Russian literature, especially War and Peace, inspires clever but self-doubting sophomore Anna to sign up for a senior class in the topic. After running out on a blind date with a man she found disturbingly attractive, Anna resigns herself to being single: as she warns the sisterhood, "Men who ride motorcycles, who wear leather like a second skin, and look hot doing it, they don't date ladies who idolize Tolstoy". After preparing herself for class by reading every book on the reading list (basically all of Russian literature) except for Chernyshevsky's What Is To Be Done and Gorky's Mother (and we sympathize), Anna rejoices: "I was obviously with my people. I was with the lovers of Dostoevsky and Chekhov" (I do hope not). Only moments later, however, she's ruing her decision to take Russian lit: "Dammit, Dostoyevsky! Why did you have to be so tragic and compelling?"

Not at all predictably, her new professor, smouldering second-generation Russian-Ukrainian emigre Luca Kroft, just happens to be the guy from the bar. As their eyes meet over a stack of Onegin handouts, Anna reflects: "Not only did he look good in leather pants, fabulous in a suit with a bow-tie, was a world expert on Russian literature, but also he apparently spoke Russian. Flawlessly. Flee! He is temptation incarnate. He will steal your soul with sexiness." And while the ending may fail to surprise ("Ms Harris, can you explain what attracted you to the ripped, sensitive, yet masterful Tolstoy-quoting bachelor who is so well-endowed his family funds most of the University's tenured positions?"), we can still value Ms Reid's novel for the innovative use she makes of the classics. First of all, Anna and Luca verbalize their feelings for each other by comparing themselves to Tolstoy's characters: he sees her as Natasha, and thus tells her to wait for her Pierre. When Anna realizes that Luca has cast himself as Andrei, she needs to come up with a new version of War and Peace in which Natasha and Andrei stay together. Secondly, however, Anna draws eclectically on 19th-century prose to put her emotions in context. Here is her response to a tense feedback session with Luca: "If only I had an autopsy to perform - like Bazarov, in Fathers and Sons - it certainly would have been an excellent excuse to flee." Best of all, however, is the moral lesson that Anna (and Ms Reid) share with us in conclusion: "If Russian literature and tragic novels had taught me one thing, it was this: disappointment and heartache might be around the next corner. But adventure, love, joy, and happiness - the living of a rich, meaningful life - was now."

We applaud the message of Kissing Tolstoy (although we fear Tolstoy would not). Another genre author who knows her Lev Nikolaevich is Jilly Cooper. Here she is summarizing Anna Karenina for The Guardian: '... [T]here's lots of sex. And Tolstoy obviously knew all the upper classes backwards, because he was a member of them and moved in those circles. He captures the double standards very well. That's the more terrible aspect of the story – Anna's brother shags the nanny and immediately he's forgiven by the wife and nobody minds at all, and Vronsky goes back into society and everybody goes, "Whoops, oh well, never mind!"'

Thankfully, the Russian classics continue to inspire popular genre-writing: I'm intrigued by Death with Dostoevsky, an American campus thriller by Katherine Bolger Hyde (whose other titles include Arsenic with Austen, Bloodstains with Bronte, Cyanide with Christie and - more surprisingly - Everything Tells Us About God). I expect great things from it. Let's not forget, as Claire Whitehead points out in her excellent recent book The Poetics of Early Russian Crime Fiction 1860-1917 that Dostoevsky himself never fully extricated his characters from the mire of genre fiction; or that, as scholar Cathy McAteer contends in her forthcoming monograph, Dostoevsky's translator David Magarshack's crime thriller Big Ben Strikes Eleven (1934) adapts several formative elements from Crime and Punishment. Clearly, crime pays, and so does Russian literature. As Dorothy Parker never wrote:
Men frequently make passes
At girls who take Tolstoy classes. 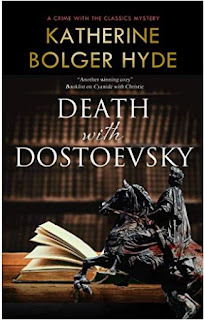 Further note to regular readers: Google stopped notifying me about new comments, and for a long time I sadly resigned myself to believing that no-one was reading this blog any more. It was a pleasant surprise when I finally fixed the glitch and discovered that I had many moons of unread comments awaiting approval! If you feel inspired or just critical, please do take a moment to sound off about one of my posts.
I should add that I have just discovered the website Netgalley and I promptly signed up to review two new anthologies of Gogol translations - by Susanne Fusso and Oliver Ready respectively. I will write about both in a new post soon!