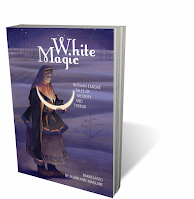 My readers know I hate to blow my own fog-horn. I prefer to hide behind my human avatar everywhere except in the pages of this blog and my safe places in a few famous libraries. But since it's Halloween once again, time of creepy pumpkins, bewigged vampires and prancing werewolves, I should share with you my own contribution to the annual Danse Macabre: a baker's dozen of scary stories, White Magic: Russian Emigré Tales of Mystery and Terror, most - if not all - translated into English for the first time.
You'll find two vampires (maybe three?), several ghosts, Edgar Allan Poe in Russia, supernatural visions, a serial killer, a haunted mirror, a murderess who wasn't and a failed suicide, and two absolutely hilarious tales by Zamiatin. Women writers are well represented with tales by Teffi, Irina Odoevskaya, and Georgy Peskov (the pseudonym of Yelena Deisha, one of whose stories also featured in my previous collection Red Spectres). White Magic is a sequel to Red Spectres, although the books have different publishers; the 'White' in the title acknowledges that all the authors in this second anthology were Russian émigré authors whose political sympathies, by and large, lay with the losing, monarchist side in the Russian Civil War. Much of what they write is infused with the trauma of exile and loss, or more gently imbued with nostalgia. Ivan Lukash, a historical novelist whose fiction deserves to be better known, really goes to town in "The Bells", his condemnation of Bolshevik St Petersburg; while in the other Lukash tale I included, "Hermann's Card" is a supernatural follow-up to Pushkin's seminal story "The Queen of Spades". Here's a taste of "The Bells", which helps explain why they had to fire Lukash from the Leningrad Tourist Board in 1925:

In the Port on Vasilyevsky Island a rusty horse-tram crawls along. The shabby horses with their bald patches and sharp tailbones might be pulling a funeral bier, a rusty catafalque-tram. On top the corpse-passengers sway, knocking their bony shoulders one against the other. The wind from the Neva sweeps around their heads.

The rattling tram has crawled by…

On the Nikolayev Bridge the wind has piled up crumbly snow. Hissing, the snow whirled around feet, blew in faces. Petrov clutched his hat, as the fringes of his coat flapped: “Let the wind wail…”

Other authors include Alexander Amphiteatrov (who does a nice line in vampires), Pyotr Krasnov (a Cossack nationalist who wrote rampantly imperialist historical fiction and tragically threw in his lot with the Wehrmacht), Gaito Gazdanov, and Pavel Muratov (the only Russian author ever to die in County Waterford). The fact that I have now translated two different short stories called "The Venetian
Mirror" about spooky looking-glasses - one by Muratov in this collection, the other by Alexander Chayanov in Red Spectres - gives me great satisfaction. (Languagehat and I have had quite an interesting chat about Venetian mirrors and Russian literature). Languagehat kindly gave White Magic a rather nice write-up, and so did the stalwart Kaggsy, whose generous words you can read here if you're still wavering.
If you're in the US, you can buy White Magic direct from my excellent publisher, Russian Life, at this link. If you are anywhere else, you can order this book from Amazon (Amazon UK link here) or buy the Kindle version; and Red Spectres is still available too.
Because my human avatar has been busy lately (obvious lie - she's on research leave, how can she be busy?), I've got a huge backlog of unwritten posts. More soon, I hope. Next up will be a post about Yulia Yakovleva's Punishment of the Hunter, a retro Soviet detective novel spunkily translated by Ruth Ahmedzai Kemp. I'm also enjoying Oliver Ready's new translation of the late great Vladimir Sharov's Be Like Children. But, until I write again, here's a few words of warning and a snippet from Amphiteatrov's story "The Cimmerian Disease", from the new collection. Warning first: if you're sitting up alone in your apartment on an icy, foggy night, reading your copy of Huysmans’ Là-Bas, and your valet interrupts to inform you that there's a "young person" asking for you at the street door, it's probably NOT a good idea to let her in.

“What can I do for you?” I asked again, but, glancing at her delicate figure, I added unwillingly, “Please sit down, and wouldn’t you like a cup of tea? I’m sure you need warming up. I would even recommend you take a drop of wine or cognac with it.”

She looked dreadfully chilled; her face was greenish, her lips blue, her dress soiled with mud and wet to the knees. It was obvious she had come a long way on foot.

She sat down silently. I passed her a cup of a tea. She drank it in a single gulp, as if not noticing what she was drinking. The tea and cognac warmed her; her lips grew scarlet, her amber cheeks acquired a faint bloom. She really was very pretty. I wanted to see her eyes, but her eyelashes only trembled without rising. Her gaze fell full on me just twice, sharp and glittering, but each time surreptitiously, from the side, when I was turning away. As she nibbled some bread, she did, however, reveal excellent teeth – small, even, and white.

After my guest’s strange revelations to me regarding Petrov, I genuinely did begin to see her as a “mamselle” – one whose lover had cooled off and sent her packing. But I didn’t blame Petrov for the introduction, although I continued to wonder why he had dispatched this silent female in my direction.

So instead of asking her a third time what she wanted, I became rather jolly; I decided that, as fate had sent me a romantic adventure, I should make the most of it. I am not one of your sentimental suitors; when I like a woman, I try to be witty. However, my guest never once smiled; it was as if she didn’t hear my jests and compliments. Her face was fixed in an expression of dull tranquility. She sat with her hands on her knees, turned half away from me.

“I used to live here,” she suddenly interrupted me, turning neither her eyes nor her head my way, as if I were not even in the room. This stubborn inattentiveness both confused and annoyed me. I thought: She’s either a psychopath, or a hopeless idiot.

“It’s all different,” she went on, gazing into a corner of the room, “different – the wallpaper, and the floors…”  Aha, I thought, a vein of sentimentality – let’s make use of it.

“So you are very fond of this apartment, I see?” I asked, hoping to provoke some candid outpouring from her. Without replying, she rose and walked towards the corner she had been studying.

“This is where the stains were,” she said.

“What stains?” I was confused. 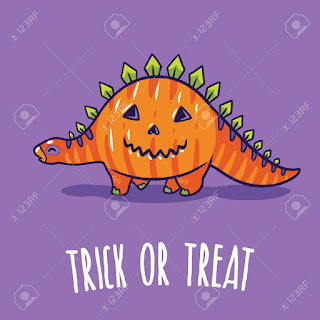 Posted by Russian Dinosaur at 14:54 2 comments: