After (Before and During)

A man crosses snowy Moscow to reach a psychiatric hospital. Amnesia is gradually erasing his personality, funneling his future into the black hole of early dementia. To fortify his ebbing consciousness, he starts a Memorial Book (Sinodik). In the Orthodox tradition, this was a list of the dead to be prayed over. But despite the narrator's Christian faith, his Memorial Book is inspired not by religion but by a gruesome childhood obsession: the ominous Book of the Disgraced (Sinodik opal'nykh) where Ivan the Terrible inscribed the catalogue of his own cruelties. In our time, this is often the only historical record of Ivan's atrocities and of the thousands of lives he erased. As the historian S.B. Veselovsky noted, Ivan's 'extreme measures' were deliberately intended to extirpate victims as if they had never existed: to '[strike] the soul for all eternity' by giving no chance for repentance before execution, refusing Christian burial, feeding corpses to dogs, killing whole families. Not even memories survived: 'in order to deprive the person of hope for the salvation of his soul, he was deprived of memorialization'.* The Book of the Disgraced was Ivan's late-career policy reversal, an attempt to salvage these lost souls and, perhaps, with theirs, his own. For our man in the Moscow asylum, menaced imminently by oblivion, his own Memorial Book is in no way a light-hearted, or sentimental, or even an individual record. First and foremost he dedicated it to 'people who [...] died before their time, leaving nothing behind except in my memory'. This book is not P.S. I Love You. It is a project for collective resurrection, for the rebirth of generations scythed down, if not by tyrants, by time itself. 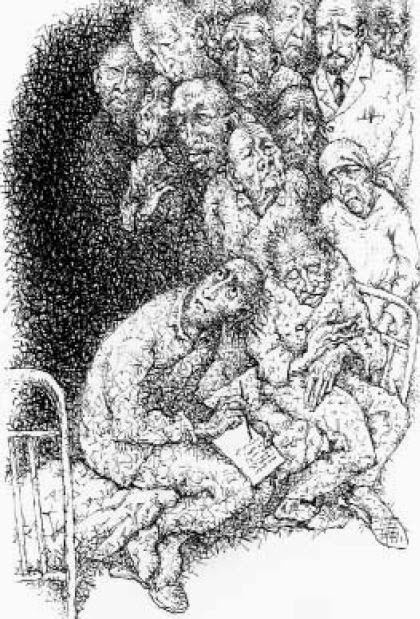 Russian novels, eh? All of the above develops in the first nineteen pages of Vladimir Sharov's Before and During (Do i vo vremia, 1991), now translated into English for the first time by Oliver Ready. Already Sharov (an old Dinosaur acquaintance) has melded madness, faith, politics, historical and personal tragedy. Even his narrator's career - as a children's writer in the late Soviet period - dimly echoes that of Daniil Kharms, the brilliant satirist who starved to death in a mental ward in 1942. Before and During is a darkly brilliant book which sometimes ironizes, sometimes genuinely challenges conceits woven through modern Russian history and culture: fleshly resurrection, holy foolishness, erotic utopia and the sexualization of terror. As his Memorial Book grows, the narrator finds himself transcribing the life stories of every inmate in the asylum. Senile Party apparatchiks and institutionalized geniuses queue up patiently to be recorded, never interrupting each other's stories, understanding 'that the life of one man is just a tiny piece, that to survive, to be saved, they had to become one whole'. Sharov has much restrained, culturally specific fun by materializing the sacred trope of collective unity in grotesque sexual incidents. Stalin, half-drowned, copulates transcendently with his birth mother. A Georgian ex-bandit conceives a son (not coincidentally, Stalin's father) in his final paroxysm on the scaffold. Vladimir Solovyev promised his followers eternal life if they had the right kind of sex; Nikolai Fyodorov and Lev Tolstoy promised their followers eternal life if they had no sex at all; naturally, all three are recurring characters. Madame de Staël has sex with everyone and twice gives birth to herself. De Staël, whom I  always thought of as an influentially incidental historical figure (remember her working a room in Pushkin's unfinished Roslavlev: 'The guests' attention was divided between the sturgeon and M-me de Staël'), here takes centre stage. Not only does she use opium to drug and technically rape an illegitimate half-wit, Nikolai Fyodorov, exploiting his romantic obsession with her (she subsequently bears him three idiot sons); in a later incarnation, she abuses her special relationship with Stalin to manipulate him into ordering the Great Purges. At the novel's end, she and Fyodorov both inhabit the narrator's ward, still deadlocked between desire and consummation, passion and betrayal. History is retold as a sexual act: Scriabin explains to Lenin that 'Russia [...] is already pregnant with the Revolution', a seductive transsexual siren who transfixes its victims with the phallic principle of terror. I couldn't find a flaw in Oliver Ready's translation; he copes well with Sharov's rolling alternation of sonority and absurdity. Personally, I wouldn't translate Stalin's coital murmurs of 'Mama... mamochka' as 'Mummy, mummy'. But a jarring endearment was hardly the most grotesque aspect of that particular scene.

To make sense of Sharov, it helps to think about Tolstoy - another writer whose bafflement with erotic love shaped both his life and his most famous works of fiction. In Before and During, Sharov suggests that Tolstoy's estrangement from his wife intensified when the children she bore disappointed him: 'Tolstoy was waiting for [...] his wife to give birth to followers. But she didn't know how to give birth to disciples, only children, so then he walked out on his own family'. In so doing, he failed to realize that his eldest son Lev Lvovich was actually his own twin, a perfect copy of himself: 'Lev Nikolayevich had the good fortune to be resurrected without dying, to be given two lives, both very long - but he failed to appreciate this gift'. Because they don't acknowledge their shared identity, both Levs die unfulfilled, equally if differently baffled. Another such failed resurrection affects Fyodorov, De Staël's great love in Before and During. Historically, he is credited with a utopian theory that sons will achieve the material resurrection of their fathers and forefathers, provided they abstain from procreation and other bodily lapses. Fate punishes the fictional Fyodorov for his hypocritical (albeit unconscious) sexual liaison with De Staël by making their three sons both illegitimate and witless: 'The task, the mission of the sons was the resurrection of the fathers, but Fyodorov's sons, who'd never seen him and knew nothing about him, would never be able to resurrect him'. In his last major novel, the aptly named Resurrection (1889-99), Tolstoy renewed his attack on Eros, switching between male and female perspectives to tell the story of a nobleman, Dmitrii Nekhliudov, who seduces and abandons his aunts' ward; as a result, she becomes a prostitute. Ten years later he accidentally causes her to be condemned for a crime she did not commit, then seeks redemption by following her into Siberian exile. 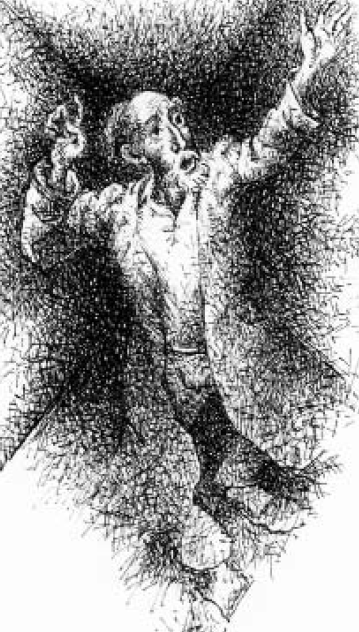 Although Resurrection contains some of Tolstoy's most lyrical evocations of sexual love (Nekhliudov's yearning for Katiusha as ice breaks on the river! Pregnant Katiusha chasing Nekhliudov's carriage - what is it about Tolstoy, women and trains?), most of the novel attacks Russia's political, legal and social structure, not forgetting some criticism of agricultural economy, with an occasional broadside against Orthodoxy. (The book's raison d'être as a fundraiser for the Dukhobors' flight to Canada has been well-publicized.) These rodomontades are oppressive, occasionally tendentious, but sincere. Idealistic, mercurial Nekhliudov reflects Tolstoy's perception of his own spiritual evolution from self-indulgent rake to penitent philosopher. And yet it would be disingenuous to suggest that Resurrection was written wholly, or even primarily, as social critique. This is a novel about a man's love for a woman: the insolence of office and the law's delay are merely tropes for the frustrations and failures of passion. The Song of Solomon famously uses erotic metaphors to represent religious faith; Tolstoy is doing the reverse. His blasts against Church and state, political and legal bodies veil his preoccupation with more intimate forms.

Nekhliudov consummates his relationship with Katiusha very early in the novel, but when they meet again, he discovers that spiritual unity with the woman she has become is much harder to achieve, even when he offers marriage. As he criss-crosses Russia, lobbying on her behalf and following her convoy into Siberia, he simultaneously pursues possession of the woman he loves, body and soul: a quest that is hopelessly impeded by their previous sexual connection. Similarly, in Sharov's novel De Staël and Fyodorov begin their relationship with a tumultuous affair (unconsciously, on one side), followed by a long estrangement. Their ultimate reunion falls short of reconciliation: Fyodorov will not compromise his chastity, nor will De Staël renounce her sexuality. Admittedly Sharov reverses the polarities in their relationship, making De Staël the socially powerful pursuer. But Sharov's Fyodorov and Tolstoy's Nekhliudov share other personality traits, including their notorious holy-foolishness. Nekhliudov even worries that his rapacious brother-in-law will cite his eccentricities as grounds to have him sectioned and administer his estate. (The asylum looms again). Like the unworldly, ranting Fyodorov, Nekhliudov is a conversation killer. In Resurrection, when everyone is conventionally lamenting the tragic outcome of a duel between two drunken officers during which one (an only son!) is fatally wounded, Nekhliudov points out the double standard. An officer gets slapped on the wrist for committing manslaughter in the name of his regiment, but a peasant, although provoked to murder by poverty and injustice, can expect exile for life under brutal conditions. 'He spoke what was in his mind. At first Countess Katerina Ivanovna tried to agree with her nephew, but then she fell silent. So did everyone else, and Nekhliudov had the feeling that by telling this tale he had committed something verging on an indelicacy' (Part II, Chapter 17).  Resurrection  recounts many indelicacies and awkward silences left in Dmitrii Nekhliudov's wake. And yet - despite the tendentiousness shared by novel and hero - both confront the psychological gap between sexual knowledge and spiritual intimacy. So do the characters in Sharov's Before and During. Neither Sharov's novel nor Tolstoy's offer a cure for this rift, this shortfall between souls, but both find tentative faith in the collective - not only by memorializing extinct lives but by choosing to love others (for Tolstoy's Nekhliudov, in a strictly philanthropic sense).

Despite Tolstoy's political crusades and Sharov's grotesque invented histories, both novels are really about the same thing: the ineffable despair latent in human love. Our destiny is to despair of love, and to love, despairing. At least, in Russian novels... 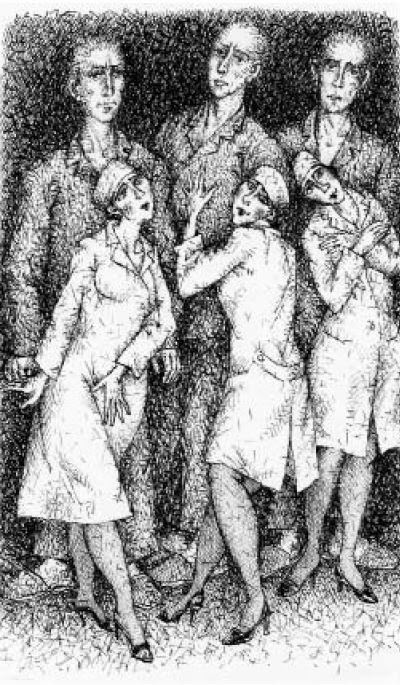 *S.B. Veselovsky cited by Alexander Yanov in The Origins of Autocracy: Ivan the Terrible in Russian History (University of California Press, 1981), p. 253.
Illustrations by Alexander Smirnov are from the 2009 edition of Do i vo vremia (Arsis, 2009).
Posted by Russian Dinosaur at 00:16