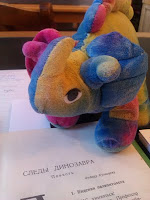 Today's research trip to the Publichka (the St Petersburg National Library) came uncomfortably close to the bone. First, there was the shock of ordering a book by one of my favourite obscure Soviet authors that turned out to be about ME. Nikolai Ognev (best known for Dnevnik Kosti Riabtseva, translated as The Diary of a Soviet Schoolboy  by the fascinating Alexander Werth), a pro-Soviet writer and educator, published a collection of three propaganda novellas in 1928. The title story, Sledy dinozavra (The Tracks of the Dinosaur), follows the adventures of a French palaeontologist, Professor Dormier, reluctantly visiting Bolshevik Russia in the hope of finding a triceratops skeleton in the Gobi Desert. In the opening pages, the Professor is enjoying a detailed prehistoric dream: 'But just then a clump of ferns rustled and swayed, and out glanced a sharp, piercing, unpleasant pair of eyes. A sharp-snouted head poked forth, adorned with an enormous two-metre-high spike and two smaller spikes. The eyes, under bulging lids, surveyed the surroundings with hostility and suspicion. "A triceratops!" thought the Professor, his heart missing a beat. "He's searching for prey!" And, as if in answer to the Professor, breaking the stalks of the ferns, a dirty-bronze hulk the size of an elephant lumbered down the chalky bank'. The next instant, ignoring my pleas for palaeozoological accuracy (and Jules Verne spinning in his grave, and the groans of countless yet-unborn B-movie directors), this tragically misrepresented triceratops is locked in a death struggle with a serendipitous diplodocus.
The Professor wakes up to discover that his faithful French assistant, Alphonse, has died of a heart attack and that he will therefore have to recruit a Bolshevik replacement...
The remainder of the tale (unsubtly, Nikolai, unsubtly!) uses the Professor's obsession with finding a triceratops to illustrate the dangers of maintaining anachronistic political loyalties (i.e. not supporting the Soviets - keep up!). Professor Dormier recruits not one but two Soviet helpers for his Mongolian expedition; while one is a Civil War veteran, the other is an ex-bourgeois, classless drifter. While exploring the desert, they find an enormous dinosaur egg, and hear tantalizing local reports of a 'darakona' [dragon] lying somewhere to the East. The Professor becomes convinced that he is on the brink of finding a triceratops as well preserved as one of Siberia's famous freeze-dried mammoths. After harassment by counterrevolutionary bandits, the party is captured by an English poppy planter called Harry Jones (ostentatiously downing whisky and soda on his veranda). He welcomes the Professor (class sympathy), but expels the two Russians across the Chinese border. One is captured and tortured by a White regiment, while the other manages to fall in with a Chinese Red battalion, which in due course rescues everyone else. The peasants on Mr Jones' estate abruptly rebel and hang him; when they try to do the same to the Professor, he burbles, 'I came to find a dinosaur... a dinosaur... you know what that is? They used to be... I even found an egg... A dragon...' 'A drako-on!' the Chinese respond, before asking the Professor whether he is on the side of the dragon. 'Yes', the hapless academic responds, 'that is, I'm looking for him...' The Professor doesn't know that the Dragon is the symbol and the nickname of a hated and feared Chinese counterrevolutionary; hence all the fervent nodding and finger-pointing whenever the Professor had previously mentioned the word to local peasants... Fortunately the Red cavalry arrives just as the noose is slipping around the neck of this unfortunate member of the French Palaeolontological Society. 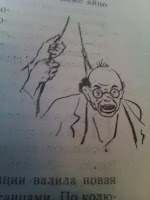 Much as I continue to admire Nikolai Ognev, I wish he'd stuck to the fossil record; I've never been a political animal.