My former college library has just survived a refurbishment; a good excuse to celebrate its treasured place in my life. Although I currently teach in Oxford, I still cherish the Quincentenary Library at Jesus College Cambridge, where I spent many happy hours neglecting my postgraduate education. It is a peaceful, light-filled, and airy space, with study rooms overlooking the college lawns and chapel. The library also boasts, slightly jarringly, one of Antony Gormley's ubiquitous nudes - those bronze-cast clones of the sculptor which now festoon the whole of England, whether standing stoically on beaches or poised suicidally on urban roofs - on the landing. This figure (above) is gnomically entitled 'Learning to See'.

Jesus College also has an ever-changing outdoor sculpture collection, and it famously boasts an equine statue on the lawn of First Court - undergraduate legend (incorrectly) holds that anyone foolish enough to mount it will be 'sent down' (expelled). Naturally this provokes hardcore hell-raisers to climb aboard, to the wrath of college porters and deans.
What a pity, I often think, that Pushkin isn't still around to combine these two wonderful sculptures - the Bronze Horse and the Bronze Gormley - in deathless verse and create a new epic poem in a Cambridge context. Imagine my surprise, therefore, when as I leafed through a library copy of Mednyi vsadnik  some time ago, a sheet of cheap white photocopying paper slipped out, printed with the following stanzas. On closer inspection, they turned out to be far inferior to Pushkin's poem, and so full of Cambridge and indeed Jesuan in-jokes as to be incomprehensible to the unschooled reader. SPS, for example, meant Social and Political Sciences - now renamed PPSIS; while the Chimney is not a funnel, but a long walled passage leading into the College. There are many such references. Never mind - surely some itinerant Russianist can be persuaded to provide a glossary...
THE BRONZE HORSEMAN
A Jesus Tale (with apologies to A.S.P)

INTRODUCTION
On the landing of the library
He stood, in mighty nudity,
And gazed ahead. He stood between
Marxism and classical civility,
Where in two carrels desk-lights gleam
On students swotting in tranquillity
EU Law, SPS, or ‘the city’:
A haven, in fact, for students deemed
To lack that stamina or agility
To excel on the river or the rugby team
Or the cricket eleven.
And so he thought,
“Here I’ll stand, with image and text,
That, like the Angel of the North,
Inspires, enthuses, and protects.
Of ignorance I’ll lift the yoke,
Ban rugger oiks who spill their Coke
All over precious library books,
Send down the chocolate-munching chaff,
Who answer back to library staff,
Suspend mud-tramplers from hooks.
After five hundred years we boast
More DVDs than Amazon,
A wider range of books than most
Cambridge rivals, all emblazoned
With three cockerels on a white field, 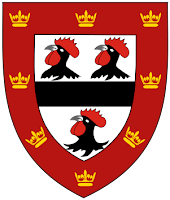 And spacious shelves to roam and browse.
Not one bookstack shall we yield
To louts who come here to carouse”.
Oh how I love thee, Quincentenary!
Your Store piled high with book deposits,
Your conference rooms for plenary
Debates, the skeletons in your closets!
The glittering panes of the Garden Room,
Librarians bopping to Latin tunes.
Seasons pass in slow rotation,
Students study, laugh and weep,
Fellows die and leave donations,
Nothing troubles Gormley’s sleep.
And yet one dreadful Michaelmas
The wheel of fortune fickle was,
And so my story came to pass.
PART ONE
On the court beyond the library
Autumnal trees bent weeping leaves
Like wind-tormented ships at sea;
Howling gusts tore at the eaves.
Such weather the college had never seen,
The Cam was flooding Jesus Green,
The ducks had fled to Castle Hill,
Still fiercer grew the rain and hail;
Huddled beneath his window-sill
The famous poet Rod Mengham
Began an elegy to bewail
All drowned in houseboats on the Cam.
A night tempestuous and ill-starred:
When Cholmondeley swiped his access card
And slammed in through the swinging doors,
Slinging his muddy rugby kit
Onto the library’s shining floor
Where he’d already trailed a line
Of prints, outlined in mud (size 9).
With a bold stroke he unzipped his bag;
Out fell a pile of overdues,
Their covers quite reduced to rags,
All in the last stages of strain,
Scribbled-on, torn, and treacle-stained,
Some even appeared slightly chewed.
Bravely unconscious of his fault,
Young Cholmondeley made his next assault.
Despite appearances that he
Devoted his waking hours to sport,
He enrolled to do geography.
Moved by his mother’s stern retort
That if he reaped another third
She’d cancel all holiday subventions
In earnest (and his dad concurred),
He grimly altered his intentions.
With shaking heart but steely looks,
A man on deadly purpose bent,
Straight after practice Cholmondeley went
To the library to borrow books.
He did not forget to arm himself
For the perusal of each shelf,
With a sandwich full of fishy goo
And a steaming flask of Starbucks brew.
PART TWO
As Cholmondeley sank under the pall
Induced by deadly lucubration
He let a stray Malteser fall;
Eluding him with a cunning twist,
It rolled by Gormley’s massive feet
And when our athlete bent to seize
His elusive post-exertion treat,
He bruised his head on a bronze fist
And shook his own in agitation,
Eyeing the colossus with unease:
‘You bloody metal nancy boy!
If you were flesh and blood like me
I’d let you have it. Wait and see!’
He threatened; and then suddenly
Turned tail and fled straight down the stairs
And out the door into the storm
Which pounced on him with violent joy
Blinding his eyes, pulling his hair,
While he stood, half-ashamed and torn.
The statue moved. Or had it then?
If he’d had a vodka shot or ten
As was his custom after matches,
Like any respectable scrum half,
He might dismiss it with a laugh.
And yet he’d seen it move. And more…
Was that the statue at the door? 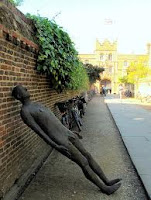 He hurtled through the empty courts
Slipping hard on icy patches,
Half-hearing through the bitter sleet
The rattle of pursuing feet
Echoing from the cloister roofs,
And suddenly, harsh equine snorts!
He stopped, amazed. The Bronze Horse
Stood in First Court stamping its hoofs;
His bronze pursuer leaped astride
And like a centaur in his pride,
Turned his mount towards poor Cholmondeley
Who panicked and fled down the Chimney.
And so began the infernal chase.
Though Cholmondeley set a blistering pace,
Until he was well past Market Square,
He still heard, behind, the metal pair. 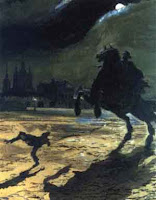 And since that dread November night,
Cholmondeley was never quite the same;
His locks turned prematurely white,
He abandoned rugby with the claim
A tendon injury'd left him lame.
He used the library when he must,
Skulking away from Gormley’s bust
As though he heard the hoof-beats still.
He even got an Upper Second.
His mates reviled him as a pill
Of sexually dubious persuasion;
His parents, never having reckoned
On such results, glowed with elation.
He never told a soul his tale
Fearing accusations of dementia;
He joined a chartered firm in Wales
And graduated in absentia. 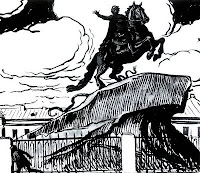 Posted by Russian Dinosaur at 02:54