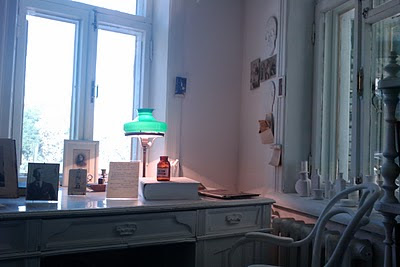 The green lamp in this photo is a very special object: it is Mikhail Bulgakov's original desk-lamp, rescued by museum curators from the attic of his house at 13 Andriivsky Uzviz in Kiev. It stands on Bulgakov's original desk, at a window overlooking the steep, cobbled street with its souvenir sellers, cafes, and crazily crooked, tumbledown houses (one of which was for sale, but my companion and I regretted we wouldn't be able to afford it). To the right, at the edge of the shot, is the window through which Nikolka Turbin crawls in the novel Belaia gvardiia (The White Guard, 1925), in order to conceal his elder brother's officer's pistol from the republican militia controlling Kiev; to the left, propped against the front window, is a photograph of Bulgakov's first wife, Tatiana Lappa. The Bulgakov family leased a flat on the first floor of this building between 1906 and 1919; the entire house is now a fascinating house-museum, with a trilingual website and an intriguing museum blog (I had never known before reading it that the dissident Soviet writer Viktor Nekrasov was born on the same street, albeit almost exactly twenty years after Bulgakov). Here also, the newly qualified Dr Bulgakov saw patients and dispensed medicines (his clinic was tucked into a cubbyhole on the corner of the first floor). Kiev is a beautiful city, but even if I didn't teach and translate Bulgakov I would have to say that Andriivsky Uzviz is one of its loveliest streets. From the height of golden-domed St Andrew's Church, the street curves steeply to the level of the River Dnieper. Broken paving and uneven cobbles faze neither local drivers, gunning uphill, nor pedestrians, involuntarily playing hopscotch amid piles of builders' sand. You can see why Bulgakov chose to make this house the prototype for the home of the Turbins, the educated middle-class heroes and heroines of his first novel, whose lives and happiness are threatened by the vicissitudes of civil war. This home on Andriivsy Uzviz becomes, in Bulgakov's novel, an oasis of domestic comfort, of peace, sympathy, and continuity. Within this mythos, however, the green lamp - or to speak more precisely, the lamp with a green shade - had special significance for Bulgakov. One of the museum staff told me that when Bulgakov moved to Moscow, he was careful to purchase an exactly similar lamp to remind him of home. As Edyth Haber argues persuasively in her article (sadly, JSTOR access only) 'The Lamp With the Green Shade: Mikhail Bulgakov and His Father' [Russian Review, Vol. 44, No. 4 (Oct., 1985), pp. 333-350], the image of such a lamp - repeated throughout Bulgakov's early fiction - symbolized his connection with his father's intellectual heritage and scholarly engagement. The lamp, however, transcends even this filial connection: it represents domesticity and harmony. This is very clear in various scenes from The White Guard. When Elena Turbina's no-good husband Talberg announces he's leaving with the Germans, Elena helps him pack his things. 'And then... and then it was horrible to be in the room, just as in any room, where things lie in chaos, and still worse, where the shade has been ripped off the lamp. Never! Never tear the shade from the lamp! The shade is sacred. [...] Beside the shade you doze, you read - let the snowstorm howl - you wait, until your visitors arrive' [My translation]. (One of the entertaining aspects of the Bulgakov museum is that you can see framed photographs of Varvara Bulgakova - Bulgakov's sister and the model for Elena - and her handsome cavalry officer husband Leonid Karum, the model for Talberg, who wasn't such a bad guy after all,despite a certain amount of  timely tergiversation). Similarly, a bronze lamp with a shade, along with the 'best bookshelves in the world', is one of the treasures of the Turbins' sitting-room. 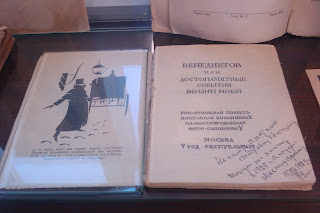 For me as a translator, a huge highlight of my visit to the museum was my encounter with Bulgakov's inscribed copy (above) of Aleksandr Chaianov's short story 'Venediktov' (1921), widely acknowledged as an inspiration for The Master and Margarita. The book was given to Bulgakov by Chaianov's illustrator Natalia Ushakova in 1925. You can read 'Venediktov' online in Russian here, while my translation will appear next year. Its hero is called Bulgakov - quite coincidentally. In addition, I really appreciated the minutely detailed knowledge and clearly affectionate dedication shown by the scholars working at the museum (although some of the non-professional tour guides are, sadly, jobsworths rather than cicerones of Bulgakov's memory). I was able to purchase a very interesting book of memoirs about Bulgakov by his Kiev contemporaries (M. Bulgakov: Kievskoe ekho, edited by A. Konchalovskii and S. Nozhenko, 2011), although sadly I had too few hryvnia to purchase the de luxe photo album of Bulgakov's Kiev. Best of all, however... the chance to meet the Master in person... although he wasn't very talkative, he was happy to pose with me for some photos.

With thanks to Libraries at the Movies  for photos used on this page, and to the staff of the Bulgakov House Museum in Kiev for their patience and generosity.
Posted by Russian Dinosaur at 15:44