Twenty-Six Men and a Dinosaur


Last week I caught myself recommending a student to read "Twenty-Six Men and a Girl". 'Easy to find in translation,' I assured her, then I wondered: was it really? In a second-hand book-cave at the weekend, a shabby Heinemann school edition from 1992 fell into my hands: The New Windmill Book of Nineteenth Century Short Stories. A slightly chewed-looking cover with an out-of-focus print of Frith's The Railway Station; a short and almost exclusively Anglophone contents list, skewed aggressively in favour of female proto-modernists (Olive Schreiner, Kate Chopin, Charlotte Perkins Gilman and her eternally yellow wallpaper). This story by Gorky, with Maupassant's "Country Living", solitarily represented all literature by furriners throughout the 19th century.

Today, twenty-five years later, Gorky's stories are no longer automatically anthologized: it's hard to imagine an anthology that would pick his fiction over Chekhov's or the revitalised translation of "The Queen of Spades". Socialist realism is no longer recent history; Gorky's importance as its gatekeeper has lapsed. Yet, in an excellent 1993 short book on Gorky's early writing, Andrew Barratt suggests that "Twenty-Six Men and a Girl" is 'arguably the best of his early stories', and still one of the best-known.

Barratt's book is suffused with limpid wit that makes me regret the almost inevitably small circle of readers for such a finely focused academic study. The chapter on "Twenty-Six Men" is subtitled "Sex and the Russian Baker"; my other favourite section is called "Games Tramps Play". Beyond these jabs at the mystique of Gorky and Soviet gor'kovedy (Gorky scholars), Barratt makes a serious case for considering this story outside of its usual context as pathetic naturalism.

Gorky's insight into his subject matter - twenty-six men earning slave wages in a cellar, endlessly turning out pretzels that they can't bear to eat - comes from his own experience as an assistant baker, in the troubled period of his earliest revolutionary activity and teenage poverty leading up to his suicide attempt. The men are so enfeebled mentally and spiritually by their situation and the universal contempt in which they are held  ("we all had yellowish-grey faces, three of us had syphilis, some had skin disease [...] we wore filthy rags, with down-at-heel shoes or bast-sandals on our feet, and the police would not allow us in the park") that they greet the daily appearance of Tanya, a fresh-faced sixteen-year-old seamstress from upstairs, with anxious veneration. It doesn't matter, as Barratt points out, that Tanya is not actually very nice to them and possibly not very nice at all - she only visits them to collect their ritual offering of freshly baked pretzels, and scornfully laughs down one man with the temerity to ask her to stitch his torn shirt. Tanya becomes their goddess of chastity precisely because they are outcasts, because they need someone to admire and not least, as the narrator admits, because she is beautiful to look at (although the men strictly avoid sexualising her in any way, even in her absence). Hence the story is valuable both as a naturalistic account of poverty and as a study in human nature - even in extreme humiliation, Gorky shows us, we still glorify someone or something which we perceive to be better than ourselves. I was struck, re-reading "Twenty-Six Men", by an extra refinement of Gorky's naturalism: the detail that the windows of the bakery had been barred by the boss "with close-meshed grilles" not to prevent the bakers from climbing or seeing out, but to stop them from giving any bread through the windows "to the beggars and those comrades of ours who were unemployed and starving". This is interesting because of the assumption that the very poor, that is the bakers, will still give to those worse off than themselves; and because of the boss's cynical device to stymie any such philanthropy at his expense. One man's theft is another man's charity, but there are no Robin Hoods in Gorky's Russia.

Barratt departs from standard readings by arguing that the story is most significant when read as a psychodrama, a 'case study in perverse psychology' (124). The men's relationship with Tanya is perverse; it is not sentimental worship, but unhealthy abasement. The gifts of pretzels are ritual 'acts of idolatry' (128). When a handsome ex-soldier starts work as a higher-status bread-baker upstairs,  he threatens to depose Tanya as the men's ruling idol by offering a charismatic masculine alternative for adoration. It is thus inevitable that the men will test the new idol against the old by daring the soldier to seduce Tanya - even while they comfort themselves that Tanya is unapproachable. And it is equally inevitable that the soldier will ruin their illusions by deflowering Tanya. 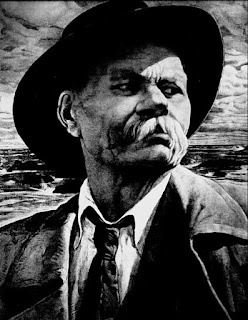 Barratt calls the scene of Tania's seduction the 'most memorable in all Gorky's writing' (129), primarily because it re-establishes Tanya's moral irreproachability in the face of her apparently very immoral behaviour. Crudely, cruelly, the twenty-six men reject Tanya, pouring on her the calumny and sexualised insults they had reserved for all other women (some of whom, the narrator comfortingly suggests, deserved it); and with unflinching dignity, Tanya rejects them right back. She walks out of their lives serenely, confirmed in her womanhood; they retreat to their cellar. Which underlines, as Barratt argues, one of many eloquent gaps in Gorky's narrative: the story describes an inescapable, dead-end situation for the men, yet one of them has clearly escaped to tell the tale. How can this be? Barratt probes further: Tanya's final attitude of righteous contempt is not just an expression of confident femininity, but an analogue to Gorky's own complex attitude to the very poor. He had lived among them, but like Tanya with her apron full of pretzels, he was able to withdraw and shut the door; his 'narrating consciousness' (134) (not just in this story but in much of his fiction) is a troubled combination of sympathy and contempt for his subjects. Gorky can empathize, but he is more inclined to judge. Ultimately, therefore, in Barratt's reading, this story is a window not just on 19th-century labour conditions, or on the construction of femininity, but on Gorky's contradictory relationship with the topic of poverty, on which his own success and reputation were built.

Despite my reservations about the "New Windmill" anthology, I was pleased to see that the editors picked the 1981 Penguin translation of "Twenty-Six Men and a Girl", which is by my "retired" colleague, the translator Roger Cockrell. The same translation has appeared in a Penguin anthology of short Russian fiction edited by another former colleague, David (D.J.) Richards, former Head of Russian at Exeter. The students' magazine from 1977 allude to both when describing David Richards as 'a prolific author and partial to a pint of a dinnertime, when he is to be seen sitting in the Ewe with another member of staff who shall remain nameless'. I like to think of my predecessors in Russian sitting together in a bar that no longer exists, discussing the complexities of Gorky's prose over pints, pies... and pretzels.

Posted by Russian Dinosaur at 09:28