A recent rummage through the remoter shelves of the Russian literature section of the University of Exeter caused me to acquire (as happens all too often) two obscure, charmingly crumbly volumes not on my list: Lady Cynthia Asquith's Married To Tolstoy (Hutchinson of London, 1960), and The Life of Tolstoy by "Paul Birukoff" (Pavel Biryukov), published in an anonymous translation in 1911. The temptation to read them in counterpoint was irresistible: to vicariously retrace the great conflict of Tolstoy's mature life, between the 'Dark Ones' (Countess Sofya Andreyevna's nickname for the Tolstoyan acolytes) and the Countess herself, or simply "Sonya", as Tolstoy always called her. In real life the Tolstoyans, or, in Gorky's words, 'the pestering parasites who fed on his mind' may have had the best of the struggle; but in the field of biography, Sonya wins hands down. 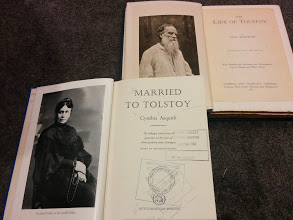 Asquith's light-touch literariness and deft style - she wrote fiction (I have long admired her ghost stories) besides biography - lend the Sonya camp a major advantage. "Marriage to a genius can seldom be easy; to be married to one as immense and self-contradictory as Tolstoy was proportionately difficult": Asquith's first sentence delicately echoes the famous opening line of Anna Karenina. She generally takes the side of Tolstoy's wife against the husband and media who jointly condemned her; citing, for instance, in Sonya's support the frequently ignored medical evidence that the Countess was ill with stress even before Tolstoy fled on his quixotic final journey in 1910. Asquith calls herself "a self-appointed Counsel for the Defence", relying on diaries by both spouses and other family members, as well as records left by other family friends (Urusov, Turgenev, Gorky) to vividly frame "the story of the woman whose opportunity, glory, and doom it was to be married to Tolstoy" (16). She coins regular well-cut phrases which demystify some of that portentous "glory and doom", referring to the younger Tolstoy's moral fixations accompanied by rather less than moral behaviour as "curdling themes".

Like Rosamund Bartlett, whose Tolstoy biography I discussed in a previous post, Asquith brings the tensions and shenanigans of the Yasnaya Polyana household vividly to life: the hideous, uncomfortable and supposedly character-forming clothes which Tolstoy wanted his eldest children to wear became mockingly known in the house as the "philosophical garments", while these same children enjoyed traditional family games such as their father's impossible challenge to stand in a corner while not thinking of a white bear - or the much-loved chase known as the Charge of the Numidian Cavalry. One of Asquith's many astute psychological asides is her observation that Sonya, in late middle age, was tired of endlessly following Tolstoy's lead; she was worn out charging with the Numidian Cavalry. She intelligently assesses Tolstoy's existential 'Arzamas' crisis as physical and emotional reaction to finishing War and Peace, and in this context, her assertion that Tolstoy's passionately expressed aptitude for Ancient Greek (which Sonya fiercely opposed) was a form of psychological "dope", makes perfect sense. (Next time you want a re-up of Herodotus, call your local Loeb dealer).

Two more Tolstoy insights are worth repeating here: "Tolstoy [unlike Dostoevsky] could not sin his way to God. Painfully, laboriously, he had to reason his way to him" (85). On Tolstoy's reaction to the 1891 famine in central Russia, and even earlier to urban poverty in Moscow, Asquith observes: "As a man he seemed less able than others to conceive of anything which he had not been an eyewitness. Not until he was shocked by the actual sight of some horror did the thought of it ever greatly concern him. Than his imagination would be so fired that all sense of proportion vanished" (100). The tellingly titled chapter "The Sky Darkens" indicate the marital crisis exacerbated by the Tolstoys' first extended move to Moscow, where his wife and daughter Tanya indulged a carefree materialism that now alienated him. After the birth of Sasha, whom Sonya had emphatically not wanted, her role as Tolstoy's literary agent adjusted from a source of pride and connubial partnership to a lonely, burdensome task. Tolstoy had made it too plain that he gave her the rights to market his work has a concession to her cupidity and pragmatism rather than as a gesture of respect and affection; now, partly in revenge for his contempt, Sonya's literary work became an explicit excuse not to feed the unwished-for baby (another weapon in their complicated strife).

Biryukov's biography, which might (in contrast, and in view of his failed courtship of Masha Tolstaya) have been titled 'Not Married to Tolstoy's Daughter', simply cannot compete. It lacks personal detail; letters and diaries are cited only occasionally, and as extensions of the generally hagiographic approach to Tolstoy's personal life and public achievements. Sonya's dangerous enemy, the opportunistic Vladimir Chertkov, appears here only as 'Tolstoy's friend, V.G. Tchertkoff', [who] gave a great deal of moral and material assistance' to the Intermediary publishing project. As an unpaid assistant and later editor of Intermediary, the former naval cadet and ex-physicist Biryukov could have revealed much about the stress of everyday interaction with the ambitious and Machiavellian Chertkov; but his account is both vague and neutral. Asquith, on the contrary, suggests that Chertkov manipulated the Intermediary specifically to supplant Sonya as Tolstoy's publisher; and she regales us with this rather splendid anecdote:

"It was a very hot night and [the Tolstoy family, with Chertkov] were having dinner on the verandah. [...] All were in a happy mood, joking, and laughing. The only drawback was the swirling haze of mosquitoes. After a quick amused glance at Chertkov's lofty head, Tolstoy, grinning like a boy, adroitly swatted its bald top. A smear of blood and the crushed remains of a huge mosquito showed how good his aim had been. Everyone roared with laughter, including the swatter, but Tolstoy's laughter abruptly died when gloomily affronted, without a flicker of a smile, Chertkov portentously said: 'Lev Nikolaevich, what have you done? You have taken the life of a fellow living creature. Are you not ashamed?' Stifled giggles continued to escape, but everyone felt uncomfortable" (139).

Asquith's clear-sightedness occasionally fails her: she has a (very English) mistrust of excessive emotional vulnerability, and draws attention to Sonya's self-pity and supposed lack of a sense of humour. On the short story "Whose Guilt Is It?" written by Sonya in reaction to her husband's radioactive The Kreutzer Sonata, Asquith feels it was "fortunate" that this "self-exonerating" response was never published (146). (It has since been both translated and published with Sonya's other short fiction in a new edition by Michael R. Katz). When, shortly after the birth in 1881 of Alyosha, her eleventh baby, Sonya writes despairingly to her sister that "bending over the flushed face of my new baby fourteen times a day, I almost faint from the pain in my breasts", Asquith ripostes unsympathetically, "Why, it may be asked, did she need to nurse her baby fourteen times a day [...]?" (113). Now I know the answer to that one, and I'm not even a mammal. The incident certainly explains why the breastfeeding of babies became a political football in the Tolstoy family long before the Daily Mail invented the Breastapo. Thankfully, Tolstoy never met Benjamin Spock (whose ideas about feeding infants at set intervals probably influenced Asquith); both men might have spontaneously combusted. All that Biryukov offers on the topic of familial discord at this period of the Tolstoys' lives is a cautious observation that "The strenuous activity of the seventies, his family cares and duties, the question of the education of the children, his successful literary career, his beneficent social work - all these did not fully satisfy Tolstoy" (87). Of course, as a long-time friend of the family, Biryukov would not have wished to embarrass any of them.

Biryukov's book necessarily closes with Tolstoy's death ("With contented, happy thoughts the great teacher of life had passed into eternity [...]. It is our duty to strive with all our strength to realise his ideal of Love and Reason" (155-6)). Asquith also gives surprisingly little space - just one brief chapter - to Sonya's last nine years. Her sources for this part of Sonya's life are limited, although she cites Tolstoy's daughter Sasha for a glimpse of Sonya at table in 1918, consuming a formal meal served by an elderly Yasnaya Polyana manservant with silver plate and a starched tablecloth, although the meal itself consists of boiled beetroot and black bread. Every day, she walked to Tolstoy's grave and she spoke constantly, if silently, with her departed "Leovochka" [sic]. Just before her death, she confessed to Sasha that she felt her bitterness in Tolstoy's final year had "killed" her husband (281). I like to think that this was just one last flicker of the melodramatic instinct that made Sonya such a successful actress at the early, happy Yasnaya Polyana family parties; and that v tom svete - in the other world - Sonya and Lev no longer glower out from plates fixed to opposite sides of a leaf, as they do in Asquith's biography. I hope that they finally fit on the same page, side by side. 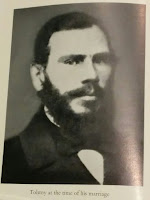 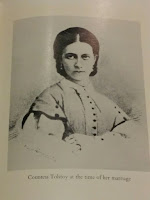 Posted by Russian Dinosaur at 00:55