A Night At The Airport with Mark Aldanov

'The wildly mad atmosphere is conveyed well...'
This is a book with a plainish, dark blue dust jacket, with a tiny picture of a rather stubby plane, which on closer inspection seems to be navigating between overlapping searchlight beams. The title gives even less away: 'A Night At The Airport', in squat yellow letters.

Oh, and there's the subtitle: 'Stories by Mark Aldanov'. But who's Mark Aldanov?
'The wildly mad atmosphere is conveyed well...'
Now I look at the inside flap of this 1949 dust jacket (it's weathered admirably). The blurb writer has clearly struggled with his task: 'A group of long short-stories given a certain unity by their strangeness, by their curious and unpredictable quality in theme and development...' '[Aldanov's] sensitivity of perception enables him to think and feel himself into the situations and characters portrayed...'  (as if this were an unusual quality in a writer) 'For anyone who cares for authentic writing, the reading of these seven stange tales [...] will be a memorable experience'.
Now I glance back to a Saturday Review critique of this same collection. The reviewer has struggled with all the stories, writing haplessly of 'The Astrologer':
'The wildly mad atmosphere is conveyed well, but the meaning of the events seems to evade definition stubbornly'.

None of this helps explain who Mark Aldanov might have been. Only a friend of Bunin, one of the beneficiaries of the latter's Nobel Prize money and also his publicly advocated favourite for the next Nobel award; only one of the four bestselling émigré writers in inter-war France, according to Marc Raeff; only the most important Russian author of realist historical prose since Tolstoy, according to his leading critic, C. Nicholas Lee. Between 1924 and 1957 most of his novels were rendered (often before they appeared in émigré presses) into English by leading Russophone translators such as Alfred Edward Chamot, Catherine Routsky, Joel Carmichael (who translated A Night at the Airport) and Aldanov's personal friend, the multicultural Nicholas Wreden who also translated Gazdanov's novels and whose work for Scribner's and the Chekhov Publishing House helped Aldanov acquire connections with both. In 1957, Aldanov died. Since then, his novels and shorter fiction, despite the high proportion translated into English, have vanished behind a veil of obscurity. Whatever happened to Aldanov?

A related mystery is where Joel Carmichael sourced the originals of the seven stories collected in A Night at the Airport. One or two appear in his various Russian-language editions of collected works (I'm aware of a two-volume, a six-volume, and an eight-volume set), but the majority are untraceable. Perhaps, like Aldanov's breakthrough novel The Fifth Seal (tr.Wreden, 1943), they were published first in translation. The lukewarm write-up cited above in the Saturday Review was by Hollis Alpert (better known later as a film critic for the same magazine); the latter accuses Aldanov of creating 'interesting formal arrangements' which subside into 'a curious lack of intensity'. Alpert considers the title story, 'A Night at the Airport', 'somewhat superficial and occasionally misleading because of the many lines of development used to tell it. Many characters [...] are delineated only enough to be seen as types (symbolical though they may be), and they are gone from view no sooner does one become interested in them. Mr Aldanov more often succeeds in gaining historical perspective, and in lighting up times and places rather than his people in these quite unusual stories'. Perhaps Alpert's disappointment is symptomatic of his generation. He admired Aldanov's ability to generate both historical and personal detail (like the glass of milk served with Mussolini's last breakfast, described in 'Number Fourteen'). But of 'The Astrologist', whose title character is commissioned by two different individuals to produce Hitler's horoscope in the last days of the war, Alpert wrote in despair:
'The wildly mad atmosphere is conveyed well, but the meaning of the events seems to evade definition stubbornly'. True, the story is baffling: the rather leaden plot twist contrasts with the formless conclusion (the astrologer wakes up in Hitler's bunker to learn that the bodies of the dictator and his new bride are smouldering outside).

I sympathize with Alpert's bafflement. Even in the strongest stories in this collection, Aldanov seems to delight in frustrating his readers. In each of the stories, pages of free indirect discourse reassure that we're inside a character's mind; but the withheld backstory never emerges, or the moment of anagnorisis happens off-page and is never explained, or the character stubbornly and inexplicably starts acting against type... like the immaculately groomed stewardess who takes up with a washed-out secret agent in 'A Night at the Airport', or the hard-up golden boy in 'The Ruby'. You keep reading Aldanov because you're enjoying the ride; but no-one likes to be left off the bus a stop early or a stop late. In any case, Alpert is missing the point as well as the stop. He praises Aldanov (as many critics have done) for his ability to convey historical detail and even political context, often using real-life characters from Mussolini to Michelangelo. But he doesn't appreciate Aldanov's ability to predict the future. 'A Night at the Airport', published in 1949, focusses on the reactions of a small group of passengers forced to disembark on a strategically significant island during a moment of international tension; there are rumours of chemical warfare, radioactive clouds and stand-offs between unnamed Great Powers; it could be the Cuban Missile Crisis. Ironically, for a historical novelist, Aldanov knew his own time too well. Rather than catering to its appetites, he expressed its hungers. The Saturday Review piece, being of its time, demanded stable plots and plain conclusions; Aldanov's winding plots and open endings are a genuine portrait of postwar ennui. Sometimes life is just formless; strange things happen for no good reason, like bumping into Hitler on your way to the toilet.

Aldanov allows himself the luxury of a serial character in two stories: Max Norfolk, a dubious guardian angel to prostitutes, terrorists, and pretty girls everywhere, with nebulously Slavic origins and a shiny American identity, recurs in two stories, as the (ambiguous) moral centre of 'A Night at the Airport' and as an even more ambiguously benign London hotel manager in 'The Ruby'. The best story in the book is 'The Exterminator'; the ominous title refers bathetically to a pest exterminator hired to de-bug (in the entomological sense) the palaces where the various Yalta Conference delegations are housed and entertained. Told variously from the perspectives of the exterminator himself, the Big Three, and the exterminator's hoped-for love interest, the plot succeeds in conveying both psychological depth and historical truth, without ever losing itself in ponderous allegory. 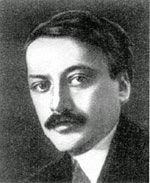 At least two contemporary translators are working on new versions of Aldanov (this dinosaur is working on 'The Field Marshal', a never previously translated  tale about one of Hitler's senior generals - which, like so much Aldanov fiction, unfolds over a journey - in this case, a train ride). Regular readers can brace for more outings in future on the Aldanov party bus...
Posted by Russian Dinosaur at 14:27