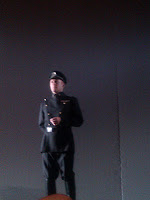 'So I say to Petr Ivanovich, That fella's got the look of a cute hoor, and Petr Ivanovich calls over Vlas the innkeeper - you know Vlas, his wife just had the babby there three weeks ago; a fine lad he is, he'll be an innkeeper like his daddy - and he says to Vlas, quiet like, he says, Vlas, who's yer man? And Vlas says to us, He's a civil servant, down from St Petersburg'.
It's Bobchinskii speaking, but not quite as we know him; this is Bobchinskii by way of Borris-in-Ossory, in Gogol's The Government Inspector  'utterly – and often delightfully – steeped in Irish demotic speech' by Roddy Doyle in a new adaptation for Dublin's Abbey Theatre. That line about demotic Hiberno-English is probably the only nice remark made by Fintan O'Toole in his scathing review of the production in the Irish Times (which I would largely endorse, although the quality of the acting is much better than he suggests).
O'Toole represents the play as a missed opportunity for the Abbey to reassert itself as an arbiter of Ireland's cultural destiny, and as a ham-handed attempt at political satire that is neither topical nor pungent enough. I found Doyle's The Government Inspector all too topical; its fervid reproduction of trending political buzzwords as one-liners and its use of economic crime as slapstick comedy serve to embed it in a cultural context Ireland already wants to forget and the rest of the world won't remember.


The glory of this new adaptation is its language. Khlestakov, surrounded with cushions and sweetmeats by the Mayor's family, is heartily assured, 'You're at your granny's'; the Mayor, rejoicing in his daughter's engagement, remarks to his wife, 'Did you ever in your wildest imagine anything the like of this, did you now?' only to reproach himself bitterly minutes later for being an 'eejit' and even 'an out-and-out gobshite'. The men who run the town are 'chancers' and 'wasters', cheerfully inhabiting a culture of brown envelopes and proto-Rabelaisian physical violence. 'We speak the same language', characters reassure each other on several occasions, acknowledging both a lingua franca of venality and a rich lexical transfer between provincial Ireland and provincial Russia. If only Doyle - who turned the tribulations of running a chip van into the greatest sundered bromance since Achilles and Agamemnon, largely through his mastery of the modulations of Dublin conversation - had stopped with this discovery. As he coyly points out in his introduction to the official programme, no less a critic than Nabokov proclaimed that 'only an Irishman' should ever tackle Gogol's verbiage. But instead, as draft followed draft and the Irish economy steadily foundered, Doyle felt impelled to seed his play with political commentary. He couldn't, he felt, actually namecheck markers of disaster like the IMF intervention. But each new, topical failure was an 'elbow' added to the body of his play - as he admits in this short interview. Elbows for nudging while winking, elbows for digging in spite, elbows for pushing yourself or someone else to the front of the queue. Unfortunately, as a Russian proverb warns, you can't bite your own elbow. Similarly, there is no bite in The Government Inspector. It sheds the universality of Gogol's Russian u-topia, but it fails to sink its teeth into the here-and-now of Irish politics. When every character malapropizes Khlestakov's name and patronymic as Ivan Austerovich (instead of Aleksandrovich), or refers aphoristically to community policing and sustainable growth, the audience didn't even laugh. Instead, they reacted uproariously to sheerest slapstick - the fag clamped in the mouth of the Mayor's obstreperous maidservant, or the bathetic epicureanism of Khlestakov's valet Osip, with his endearing gurrier rumble. And the cast are brilliantly selected to supply these predictable laughs (although Khlestakov is hopelessly miscast; O'Toole's snarl about Jedward ten years on is all too accurate).

Both O'Toole and Doyle miss the main point about Revizor, to restore its original title. Gogol would have 'eaten the face off' Roddy Doyle, were he to see the Abbey production, for compounding a misconception that has haunted its author. This play is not about systemic corruption, and it is emphatically not about specific governments; Gogol reacted to the near-universal misunderstanding of his play as daring satire by leaving for Europe. Gogol's writing always suggests much stranger things about human nature than can be contained in any political continuum. In this downloadable article in Scando-Slavica, Jostein Bortnes argues that Revizor is about the inescapability of human evil: Khlestakov is 'a living symbol of evil' which Gogol conjures 'in order to destroy it by laughter'. Khlestakov's escape, followed by the sinister, suspended presence of the real Inspector during the famous dumb scene, allows evil to transcend the limitations of the narrative. Gogol's genie gets out of its bottle, and into the audience - who are we laughing at, after all?

Clearly, Revizor is a play capable of working brilliantly in international contexts. But the contextualization should be carried through completely, if it is to be effected at all. Localizing Gogol kills the universality of his portrait of evil; but if the play must be localized, then give us names and places. Turn Pushkin into Flann O'Brien; turn Baron Brambeus into Joseph O'Connor; and turn Anna Andreevna into Maureen O'Flaherty, since the actors aren't going to get the stress right anyway. Set the whole thing in Kiltimagh for authenticity!

Posted by Russian Dinosaur at 19:30