Hodge's The Collaborators: Collaborating Against Bulgakov

According to Robert Service's Stalin: A Biography (2004), Stalin 'ushered [Mikhail Bulgakov] into the pits of depression. He perished a broken man in freedom in 1940. [...] Unlike Bulgakov, [Akhmatova] endured her situation with lasting fortitude' (p. 307). What, one wonders, did Bulgakov do - or not do - to earn Service's faintly expressed contempt? Not suffer lyrically enough? Not get shot? Die, instead, of an untreatable inherited condition that no dictator could have inflicted (unless Stalin had corrupted the family gene pool prior to 1859, the year Bulgakov's father was born)? 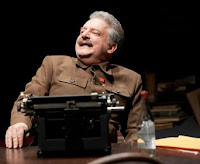 Unfortunately, the National Theatre's new production of John Hodge's play about Bulgakov's last years - The Collaborators - appears to be singing from the Service song-book. (Please note that any negativity towards Robert Service's book is entirely unprejudiced. This blog is NOT written by O. Figes, his relatives, or his research assistants. O.F.). Hodge portrays Bulgakov as a noble, ever-so-slightly smug martyr perishing gradually on the pyre of apolitical aesthetics, then unexpectedly "invited" by the NKVD to write a play in honour of Stalin's forthcoming sixtieth birthday. If he agrees, his play Molière will be un-banned and staged; if he refuses, his beloved third wife, Elena, may be shot. Unable either to refuse categorically or to start composing, Bulgakov is summoned to a secret subterranean meeting with Joseph Stalin. Coyly outing himself as Bulgakov's 'number one fan', Stalin offers to ghostwrite the play if Bulgakov will sign the infamous directives authorizing collectivization, grain requisitions, interrogations and purges. Terrified, amused, and flattered by their pact, Bulgakov finds himself enjoying the material advantages of his new situation (a car with driver, hot running water), and even cautiously defending Stalin's policies - which are now, in equal measure, his own. Bulgakov's 'collaboration' on the play's text is limited to its final scene, written as a vicious exposé of his patron... and yet, illogically, this is represented as an irrevocable concession on the author's part. As Michael Billington's insightful Guardian review argues, Hodge's play jemmies Bulgakov into the role of a 'fatally compromised artist', and, as a result, 'its satire does not strike its intended target'.

The social polarization in this play - lovely, endangered intelligentsia versus knuckle-dragging secret police - is enough to send historians with a sense of nuance screaming into the woods. It's beautifully acted, but Englishly acted: Alex Jennings plays Bulgakov as a faintly pompous conscientious objector who obviously fagged at Eton, while Simon Russell Beale's joyfully disjunctive Stalin is a Lancashire farmer with a Jekyll and Hyde complex.

Although Jacqueline Defferary is a luminous choice for 'Madame Bulgakov', even her role exhales an air of crisp cucumber sandwiches and breakfast marmalade. Why the 'naive proletarian' character has to be Scottish is anyone's guess; why the hint that things weren't going to end well had to be headlined from halfway through the second act by a proliferation of the word 'fuck' is downright mysterious. What's more, I viewed The Collaborators as a stage performance broadcast to the cinema, a mode which allows the producers a unique opportunity for propaganda double-dip. Playwrights and directors necessarily manipulate presentation for emphasis and affect; the recording camera further pre-empts viewers' visual choices by determining perspectives, angles, and close-ups. The play becomes a case study in the science of 'breaking' a humanist intellectual - by means of manipulation, humiliation, and cumulative implication.

What will truly upset those with any knowledge of the period, of course, is why Hodge had to pick on Bulgakov. Weren't there enough real collaborators in 1930s Russia without selecting a genius who was unscrupulous enough to wish to remain both alive and professionally active? Julie Curtis, a British Bulgakov expert who advised on the play, admitted in print that Bulgakov's four-act play on Stalin's revolutionary youth, Batum, was the 'the one act which has come close to tarnishing his reputation' (particularly because it was NOT written under duress). She adds, however, that '[o]n the whole, Bulgakov can be said to have preserved his political integrity'; she gives the example of a letter Bulgakov wrote directly to Stalin in defence of his friend, the exiled playwright Nikolai Erdman (Curtis, Bulgakov's Last Decade, 1987, p.205), as late as 1938. In a diary entry for 17 August 1939, the day rehearsals for the play were abruptly and cruelly cancelled, Elena Bulgakova wrote in her diary that the excuse given for cancellation was that the fictionalization of Stalin was viewed from 'above' as unacceptable, and also as a transparent ruse to regain status. 'How could it be proved', she wrote, 'that M.A. had no intention of building any bridges, but simply wanted, as a dramatist, to write a play with material he found interesting because of the material, and with a hero, and that the play should not lie in his desk drawer, but should be performed on stage?!' (Manuscripts Don't Burn: A Life in Letters and Diaries, ed. Curtis, 1991, p. 288). Bulgakov had long resigned himself to the truth that his real work, his 'sunset novel', would remain unpublished.

The Collaborators cleverly evokes The Master and Margarita (and Teatral'nyi roman) without ever mentioning either, by weaving (distorted) fragments from both Molière and Batum into its structure: two plays-within-a-play in apparent homage to Bulgakov's novel's alternation between historical fallacy and contemporary fantasy. One character even comments 'Didn't someone say manuscripts don't burn?'. The closing citation from Molière ('The reason for his death was the king's displeasure') is as poignantly profound as you wish to make it (although those aforementioned historians will have already left the building). Another silent but pervasive presence  is the agency which actually effects violence, punishment, and social transformation. Who runs the system? Stalin? Bulgakov? Is it Marcus Cunningham's lividly evil Stepa, the NKVD bodyguard-turned-psychopath? Is it the victims who 'collaborate' in their own destruction by signing false confessions? Make no mistake: The Collaborators is neither stupid nor simplistic. But it perpetuates a crime of conscience: turning its audience into collaborators in the defamation of a great twentieth-century author. Hodge recently had the front to 'insist' to the Guardian that 'this is Bulgakov's story, not his own'. It's neither.

Posted by Russian Dinosaur at 09:58