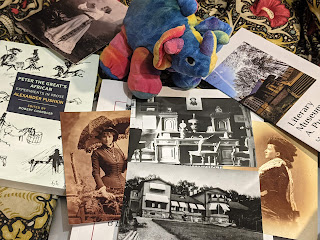 On the edge of Vilnius, the capital of Lithuania, is a lovely forest park called Markučiai. It smells excitingly of moss and pine needles: as you wander across its intricate, sloping paths, you discover fishing lakes, a tiny chapel surrounded by a handful of graves, and a museum dedicated to Aleksandr Pushkin. This last might well give the visitor pause. Was Pushkin ever in Vilnius? No, although his celebrated great-grandfather was (see more below). Then why a museum in his name? I went inside to find out. At first sight, the museum appeared to be closed, and the information boards arranged between the house and the park were all in Lithuanian, a beautiful but rather opaque language. After puzzling over the pictures on the boards for a while, I tried the door. It opened, and a small fierce lady with black-button eyes, built rather along the lines of a matrioshka doll, peered at me through a tarnished glass window. In a corridor off to one side, another woman was speaking loudly to tourists in a language I couldn't follow. On my left was a dining room with a polished dark wooden table, surrounded by equally dark, ornate, rather brooding dressers, the knobs on the drawers carved like the heads of friendly gargoyles. Somehow I felt I'd fallen back in time, perhaps into a Dovlatov story. "Do you speak English?" I ventured. "Russkii?" 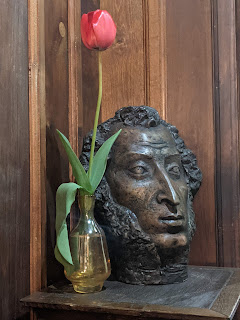 As if summoned specially to rescue me, another member of the museum staff appeared - a very kind and encyclopaedically informed lady from St Petersburg, Ellina by name. Ellina generously gave up what must have been an hour to show me the whole museum, from the furniture in the dining room (Pushkin's own, brought from Mikhailovskoe) to the clay golden cockerels and cats made by local children after reading Pushkin's fairy tales. She also explained the mystery of the museum dedicated to Pushkin in a city the poet had never visited: it was not Aleksandr himself, but his younger son Grigorii who had lived in the house. Grigorii married Varvara Melnikova, the daughter of a retired Russian general and the niece of Russia's first Minister for Transport, Pavel Melnikov. The Melnikov brothers were attracted to the Markučiai estate by the very factor which deterred other buyers: the construction of a new railway along its edge. Varvara received the estate as her dowry. After she divorced her philandering first husband, she met Grigorii Pushkin in Petersburg, where he held an administrative post and also curated his late father's estate. By the time they married in 1883, Grigorii was nearly fifty; Varvara twenty-eight. It was his first marriage, her second. They had no children together, but by all accounts their wedded life was blissful. For the first fifteen years they lived at Mikhailovskoe; then, after Grigory managed to sell the estate to the Russian Academy of Sciences, they settled at Markučiai. Sadly, after only six years in Lithuania, Grigorii died. Varvara remained at the house, except during the war, until her death in 1935; her dearest wish was for her property to continue to honour her extraordinary father-in-law by preserving Grigorii's relics of Mikhailovskoe. And while some items have been lost, many remain. The house is still magical, with the view from the first-floor balcony almost unchanged; Varvara's oils, mostly portraits of grazing cattle, survive on the living-room walls; and many fascinating books and trinkets from both families on display. I was no longer in a short story by Dovlatov, but possibly Chekhov. 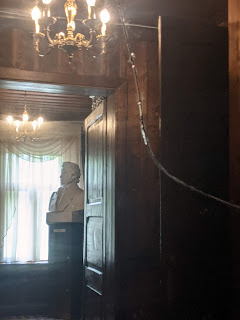 Most of all, I was enchanted by the looking-glass. This is a large swing mirror placed at the end of a narrow corridor; the glass shines within a square mahogany frame, reflecting a distinguished bust of the poet. A large crack festooned with tiny pieces of Scotch tape runs drunkenly across one upper corner, a legacy of over-enthusiastic late Soviet remont. But what almost literally enchanted me about this mirror was Ellina's words: this was Aleksandr Pushkin's mirror, or rather his mother's, brought from Mikhailovskoe with other treasures by the poet's dutiful younger son. Pushkin the child had looked into this mirror; possibly played divination games with it, gadanie, as Tatiana and her girlfriends do in Evgenii Onegin. The young dandy Pushkin had been reflected in this mirror; perhaps he'd stopped in front of it to whisk his cravat impatiently into shape, many times during his two-year exile at his mother's estate, in between penning his first great prose works. I stared into the mirror intently, willing Pushkin to swim up out of the depths. Tears sprang involuntarily to my eyes. I was so close to Pushkin. I'd read this story. Hell, I'd translated this story...

Some dreadful force was pulling him closer and closer to the mirror's yellowed, lacklustre surface. Suddenly he shuddered... he saw too alien, utterly frenzied eyes fixed on him. At the same instant he felt a sharp jerk. His mirror double had seized his right hand and forcefully tugged it under the surface of the mirror, triggering circles of ripples as if across a pool of mercury... (Aleksandr Chaianov, The Venetian Mirror)

Well, maybe not like that, but there are alternatives...

I stepped forwards and stared greedily into the depths of the mirror. My heart skipped, as though a powerful hand had gripped it; I cried out. I ran from Signora Moricci’s house, like one trying to outrace mortal danger.  (Pavel Muratov, The Venetian Mirror)

I stretched out my hand and touched the wood... I touched the glass... Ellina had disappeared on an errand, and there was no-one around except me, the mirror, and possibly Pushkin. I gazed hard into the dimness beyond my reflection, but no mercurial fingers rose from the depths to meet mine. If Pushkin was in there, he wasn't coming out to play. 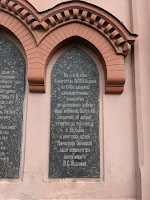 As I mentioned above, Grigorii was not the first member of the Pushkin clan to be linked with Vilnius. The poet's great-grandfather, Abram Gannibal, a military engineer and translator celebrated as Peter the Great's African (as in the title of Robert Chandler's new edited collection of Pushkin's prose experiments for NYRB Classics), was baptized at an Orthodox Church in the Old Town. The stele commemorating this event can still be seen on the church exterior.

And as for me, like Pushkin's Tatiana, I'm still wishing for a magic reflection:

**The citations above are from my short story anthologies Red Spectres and White Magic respectively. You can buy them on Amazon or from the publisher websites via the hyperlinks. As for the final citation, this is from Book Five of Eugene Onegin, translated thus by Charles Johnston (not the best translation but the only one to hand): 'Tatyana in low-cut attire / goes out into the courtyard spaces / and trains a mirror till it faces / the moon; but in the darkened glass / the only face to shake and pass / is sad old moon'. **

Posted by Russian Dinosaur at 00:14