A Pilot in the Hive: Antoine de Saint-Exupéry's Moscow Visit 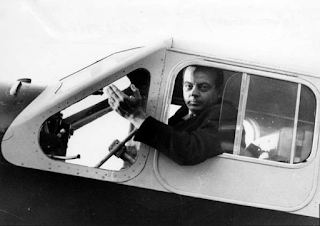 Another Antoine de Saint-Exupéry post today, for fans of the flying comte. Recently, I've been reading Katerina Clark's excellent Moscow, the Fourth Rome: Stalinism, Cosmopolitanism and the Evolution of Soviet Culture 1931-1941 (Harvard UP, 2011), which explores the intersection of cultural expansionism and cultural receptivity in Stalinist Russia via the personal lives and global adventures of certain Russian and European intellectuals, principally Sergei Eisenstein,  Sergei Tretiakov, Mikhail Koltsov, and Ilya Ehrenberg. The walk-on cast is full of international luminaries, including Walter Benjamin, who made an 'unheroic, private trip' to Moscow in the winter of 1926-7; Le Corbusier (late 1920s); Paul Robeson (1935); Edmund Wilson (1935); and Bertolt Brecht (in 1932, 1935, and 1941). Clark's central premise - if such a richly complex book can be confined to one argument - is that Stalin's government, aware of its technical and civic disadvantages, emphasised and proselytised its cultural superiority. This involved not just the export of Soviet culture abroad but the promotion of foreign culture at home (via state-subsidized literary translation, screenings of Walt Disney films, King Lear in Moscow's Jewish theatre) and invitations to left-leaning intellectuals and foreign journalists. Saint-Exupéry belonged to the latter category, as a correspondent for Paris-Soir (he was also a commercial pilot and a publicity attaché for Air France). Arriving (by train) in Moscow on 29 April 1935, he remained there for almost a month, during which he published six impressionistic articles in Paris-Soir.

Clark calls 1935 the 'high point of Soviet internationalism'; that year, Saint-Exupéry was in Moscow at the same time as Brecht. Unlike the latter, however, he was not able to secure a coveted VIP ticket to the May Day parade; in fact, on the morning of May 1st he was officially confined to his hotel (the Savoy on Rozhdestvenka, near the Bolshoi Theatre and the modern-day Kuznetskii Most metro station). 'In an area within a kilometre of Stalin, no-one was allowed to slip through unless their civil status and their ancestors had been checked, re-checked and, for greater security, checked a third time'. Eventually escaping from the Savoy (apparently by a timely bribe), Saint-Exupéry wandered the strangely empty streets near central Moscow, repeatedly encountering a security cordon when he tried to approach the parade. The aerial display - which he described as a thousand planes flying low in formation like a single metal tool - he found unexpectedly oppressive, likening it to a machine press placing its stamp on the surface of the city. When he finally glimpsed the parade, he found the spectacle equally sinister:

The parade of an entire people, like that of the thousand planes, has the same pitiless quality that one finds in the unanimity of a jury. And this flow of black and sombre outfits, in spite of the brightness of red pennants, this march that was slow and almost blind in its strength, was perhaps still more impressive than a parade by soldiers, for soldiers do a job and, when the job is over, they become again different types of men. These people had been seized by their very roots, by their work uniforms, by their flesh, by their thoughts. And as I watched them advance the march suddenly stopped (from 'Sous le grondement de mille avions, Moscou tout entière a célébré la fête de la révolution'.)

For a few moments, musicians struck up a tune; couples and families began to dance; the terrifying uniformity was shattered, and the May Day marchers acquired an everyday conviviality that reminded Saint-Exupéry of Parisians celebrating the 14th of July. Someone even offered him a cigarette, someone else offered him a light; but once the pause was over, the marchers resumed their unflinching path towards Stalin.

Saint-Exupéry's view of Moscow was not particularly sympathetic (like Brecht's, at the time). In a previous post I discussed his relatively clear-eyed, if still over-idealistic, view of Soviet justice, and his insightful reporting of the Maxim Gorky disaster. His negative reaction to the May Day flyover was all the more surprising given that, according to his biographer Stacy Schiff, the editors of Paris-Soir had probably picked him for his competence in reporting on this very event. He did not have cultural luminaries to shepherd him around, unlike Brecht, who was ciceroned by Tretiakov and Eisenstein as well as his German theatrical friends Erwin Piskator and Bernhard Reich; even the lethargic Benjamin (who worried about slipping on ice and misreading signs in Cyrillic) was shown around Moscow by his on-again off-again lover, the Latvian director Asja Lacis. Instead Saint-Exupéry was met in Moscow by Georges Kessel, brother of a fellow literary pilot, Joseph Kessel; the family originally hailed from Orenburg. Nor did he pay for hospitality with hagiography; he wrote freely about Stalin as an 'invisible man', controlling the destinies of his people from a 'zone of desert and silence'. There, 'at the heart of the Kremlin, between the black and gilt buildings and the ramparts enclosing them, stretch lawns set like traps' (from 'Sous le grondement...').

Saint-Exupéry was well aware that foreigners in Moscow were tailed by 'guardians' who supervised their explorations ('Une étrange soirée avec Mlle Xavier at dix petites vieilles un peu ivres qui pleuraient leurs vingt ans...'). This did not discourage him from a foray into a decaying pre-revolutionary apartment block to meet an elderly French lady, one of approximately three hundred Frenchwoman formerly serving as governesses in wealthy Russian families, forgotten survivors of the Revolution, 'grey mice' who live insignificant, invisible lives off informal French lessons and small-scale black marketeering, bartering their neighbours' useless luxuries (make-up, gloves, monocles). After comical interludes with neighbours in the building and in the entrance of the collective apartment, where Saint-Exupéry, who speaks only French, endures successive interrogation in Russian, English, and Danish, he is finally claimed by Mlle Xavier, a frail septuagenarian, delighted with this visit from a glamorous compatriot. She assures him that 'Une révolution, c'est bien ennuyeux', before confiding her anecdotal experience of the Bolshevik regime:


And she described to me the darkest day of the civil war. That very morning she had been given neck-ties. Neck-ties, on a day like that! But Mlle Xavier saw neither soldiers nor women machine-gunners, nor dead bodies. She was much too busy turning a profit on the neck-ties which, she told me, were all the rage.

Or the time a little later, when Mlle Xavier was rounded up with hundreds of others and held overnight for interrogation, sleeping on a quilt she happened to have purchased just before she was arrested. Finally she was brought before the the operatives who reviewed arrestees' papers before either freeing them or sending them to the cellars to be shot; Saint-Exupéry notes that their chairman was bleary-eyed from working through the night.


And this man from whom only two paths inexorably led, towards life or towards death, this man asked her nervously, scratching his ear: "I have a twenty-year-old daughter, mademoiselle; would you like to give her lessons?"
And Mlle Xavier, pressing the quilt against her heart, answered him with crushing dignity: "You have arrested me. Judge me. We will speak tomorrow, if I am still alive, about your daughter."
And that evening she added, with a sparkle in her eyes:
"They didn't dare look at me; they were so very ashamed of themselves."
And I respect these adorable illusions.

Saint-Exupéry compares her wilful self-deception with the admirable delusions of Cossacks at a Crimean port, who had arrived too late to catch the last boat out, which was already overloaded with refugees and wallowing dangerously in the water. Any man swimming for the boat was shot, to prevent a capsize that would drown everyone. Yet the Cossacks, indefatigably, magnificently and misguidedly, kept dismounting on the quay, killing their animals (to leave nothing behind for the Reds) and plunging into the water to be shot in their turn. (Saint-Exupéry credits this anecdote to a female acquaintance).

Clark and others remind us that a fixture of the hagiographic literature expected from foreign visitors was the arrival epiphany: the train journey (as it usually was) into the Soviet paradise. Saint-Exupéry would have disappointed Soviet audiences. He documented a sleepless night in Eastern Europe; finding the luxury compartments almost empty, he roamed into the cheap carriages and viewed the sleeping Polish seasonal workers, leading to a tragic meditation on the ugliness of ageing humans, and our wasted potential as a species. One little boy's beauty arrested him: 'He was born to this couple like a kind of golden fruit. This triumph of charm and grace was born from the heavy-limbed herd! I bowed over that smooth brow, that sweet pucker of the lips, and I told myself: "Here is the face of a musician, here is an infant Mozart, here is a fine promise for life!" The little princes of legend were not a jot better than him. Protected, surrounded, tended, what might he not become?'  (from 'Vers l'U.R.S.S.: La nuit, dans un train ou, au milieu de mineur polonais rapatriés, Mozart enfant dormait... Les petits princes de légende n'étaient point différents de lui'). But, Saint-Exupéry concludes, 'Mozart is doomed' to the life of the herd. The lonely pilot met the little prince for the first time, perhaps, on the Moscow train in April 1935.

Any hopeful Soviet readers would have had to be satisfied with Saint-Exupéry's declaration that he had been naive to expect to appreciate Moscow all at once, to understand it as soon as he stepped on the station platform; and throughout his month there he never posted a definitive account of Stalin's city. In fact, he posted copy belatedly and reluctantly (Schiff suggests he kept running out of cigarettes, which he relied on when writing). His next excursion was to the Mediterranean for a series of aviation conferences; presumably more congenial work. Saint-Exupéry's best impression of Moscow, for better or worse, was also his first (from 'Moscou! Mais où est la Révolution?'):


The train changes course and the city appears all at once, all of a piece, like a single unit. And I count above Moscow seventy-one planes taking to the air.
And in this way the first picture I have is that of an enormous hive, fully alive, beneath a swarm of bees.

Disclaimers: all translations (and therefore errors) are my own, from Un sens à la vie, the 1956 reprint of Saint-Exupéry's early journalism. I have also used Stacy Schiff's Saint-Exupéry: A Biography (Random House, 2011), Katerina Clark's Moscow: The Fourth Rome, and Walter Benjamin's Moscow Diary, which can be downloaded here with a Jstor subscription.

Posted by Russian Dinosaur at 22:11