The Year of the Dinosaur, or Russianists Have Feet of Clay


Faithful readers of this blog will note, and lament, its sad irregularity of late - a condition I blame entirely on the two dinosaur eggs, or rather hatchlings, I have acquired since accepting that cheque from that nice billionaire John Hammond at Ingen. One of my posts is almost a year overdue. It describes my most exotic Russian Studies conference yet, my trip to Xian for the April 2015 conference of the Chinese Association for Russian Literature Studies (CARLS - if only they'd called it the Chinese Union instead, it could have been CURLS). Everyone knows one thing for which Xian is celebrated: the garden gnomes, as my fellow presenter Mike Nicholson of Oxford fondly calls the terracotta army of Emperor Qin Shi Huang.


My invitation had been arranged long before, thanks to networking between Mike and his old friend Professor Liu Wenfei, one of China's most respected Slavic scholars - now located in the reassuringly named Capital Normal University. Later in 2015, Professor Liu would receive a formal Friendship medal from Putin in person, setting a seal of retroactive celebrity on the conference. Alas, despite advance planning, one of the most basic details still went wrong: when I arrived at Xian airport, the promised aspirant (postgrad) was not there to collect me. Xian International Airport is a vast structure set in a wilderness sixty miles from the city. No-one spoke English, or Russian. Eventually, I found a taxi willing to transport a distressed saurian to the conference hotel - the Long March - and with some help from the partially Anglophone girls on reception, the driver even issued a byzantine and entirely incomprehensible receipt. Almost immediately the conference organizer, local Slavist Yang Li, intervened and helped me check in, and provided my missing postgrad - Ksiusha, an extremely sweet student with some English and very good Russian, who was seconded to protect me for the next five days. It transpired that I had not been met (although arranged weeks in advance) because I had not responded to Yang Li's last-minute email checking whether I understood that I would have to pay the postgrad's travel costs as well as my own.  In the end, my postgrad was so attentive I had very hard work to persuade her to let me travel alone around the city - but the crossed wires over the airport meeting showed me that CARLS don't make a habit of inviting foreign scholars. (Conversely, it's hard to imagine the committee of the UK Slavist organisation, BASEES, taking any responsibility whatsoever for meeting an obscure Chinese presenter at Heathrow).


Who goes to CARLS? Most Chinese scholars of Russian literature; language teachers, including expats, at the host university; and a sprinkling of native Russian intelligentsia, ranging from scholarly-minded TORFL teachers to the conference's star turn, Moscow intellectual Vladimir Agenosov. Papers were delivered in a building on the vast, very Socialist Realist campus of Xian International Studies University, which we participants reached every day in a convoy of buses.
Disappointingly for me, almost all the papers were given in Chinese (a very few, including my own, in Russian); topics ranged from Lermontov and Baratynskii to Solov'ev and Pelevin, with a concentration on 20th century authors. Kindly efforts were made to include me, from whispered simultaneous translation into Russian by the host University's departmental head, to an impressive booklet of notes written in longhand in excellent Russian - and later scanned to me - by Ksiusha; even friendly breakout seminars, with satsumas and fly-cemetery Chinese pastries. Some papers offered a Chinese angle (such as Sholokhov or Shevchenko in China). My friend Dr Li Xinmei from Fudan University in Shanghai, who works on first-wave Russian émigré literature as well as late Soviet postmodernism, introduced me to Beijing Russianists over buffet dinners in the Long March dining room. 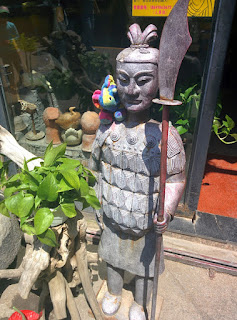 Like ASEEES in the States, CARLS travels to a different Chinese city every year. I would go back - although, given the language barrier with most of the papers, probably to a city whose touristic opportunities equal those of Xian. Knowing a little about Chinese hospitality (to make sure I missed nothing during a two-day visit, a colleague once offered to drive me around Beijing's sights at 9pm), and sorely intimidated by the terrifying traffic and sprawl of the city, I was perplexed when not a single local offered to show me the terracotta warriors. Ksiusha had already done her bit by taking me for a saunter on the reconstructed city wall, but she was literally too kind: her constant concern for my health as a foreigner and as a miniature extinct reptile was all too solicitous. After the fourth day of the conference, everyone melted away, leaving me with a free 24 hours. I braved the one-hour bus journey on an overcrowded jalopy to the terminus at the foot of the city wall; walked seven kilometers, or two sides, of its massive fourfold enclosure; descended at the city train station and tracked down the authentic bus bound for the terracotta complex; two hours later, I was fighting Chinese cameras out of the way for my own selfie at the edge of that genuinely awe-inspiring pit. In the evening, I wended my way home through the city centre, catching the last bus for a chaotic but strangely satisfying ride back to the hotel past (at first) breathtaking pagodas, then endless cheap shops and restaurants, shabby garages and burgeoning tower blocks.


I will leave you with these remarkable words of wisdom by a Chinese sage, glimpsed in north-central Xian from the window of a speeding bus. "Limited youth. Do not waste waiting on that is to buy existing homes real live." Profound and mysterious; a moral for our times.

Posted by Russian Dinosaur at 10:51