I remember reading my first edition of The Ghost of Alexander Wolf (Prizrak Aleksandra Vol’fa), a smooth-bound tome from a multi-volume set of Gaito Gazdanov’s novels, in the public library of Krasnoyarsk. Having ordered this book purely because it had the word ‘ghost’ in its title, I persevered evening after long winter evening, verb-surfing my way through a crumbling Russian-Russian dictionary (probably because the Russian-English dictionary was missing), surrounded by student teachers bemusedly blunting their English on the best of George Moore and Jack London. I also remember buying my first Russian copy of the novel, in a magazine kiosk in a metro station under a major junction in Moscow’s Garden Ring. It was a compact green Azbuka Klassika edition, with a more or less entirely inappropriate front cover image of Dali’s Partial Hallucination: Six Ghosts of Lenin on a Piano (probably also chosen for the word ‘ghost’ in its title). I forgave Gazdanov the long dictionary chases, and his publishers the awful cover, because for no reason that made sense, I loved this book. Enter Pushkin Press, an innovative small British publisher. They print new translations of obscure, usually foreign writers (think Antal Szerb) in cunningly designed palm-sized editions with discreet French flaps and Baskerville type. Here was my beloved book, suddenly, in a new translation (as The Spectre of Alexander Wolf) – and this time, what a cover! A soldier drooping in crumpled uniform, a pale horse, a blasted tree, an open volume whose red ribbon trailed into a voluptuous trickle of blood – in other words, a rare cover by an illustrator who understood the book’s odd rhythm. I flipped tremblingly to the first page. How had the book's first line, ideal for tormenting first year translation students because of its multiple clauses and unrelenting cadence, been rendered? 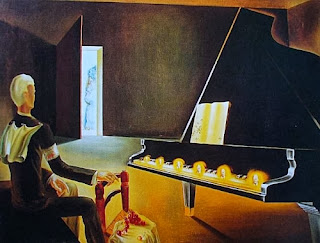 Of all my memories, of all my life’s innumerable sensations, the most onerous was that of the single murder I had committed.

Onerous for тягостный! What a stroke of sheer good sense! Reader, I bought it –  planning to enjoy one of my favourite Russian novels in a new medium that apparently matched its unique (and more than slightly eccentric) mood. Alexander Wolf makes little sense: it’s probably the least organized of Gazdanov’s major novels. After that thunderclap of an opening, the narrator recedes almost two decades into the past to describe an incident in Crimea at the tail end of the Civil War. Chap A shoots Chap B (it is never quite clear why). Chap B, who is not in fact wounded, shoots and kills Chap A and rides off on Chap A’s horse. Much later, now working as a jobbing journalist in France, Chap B (our narrator) reads a short story which recounts the shooting from Chap A’s perspective. Chap B makes exceptional efforts to trace the author, one Alexander Wolf, only to draw a blank with the latter’s publisher, who assures him that Wolf cannot possibly be a Russian exile, as he is undoubtedly an Englishman; then adds enigmatically that it was a shame all the same that Chap B hadn’t aimed better. Meanwhile, Chap B meets a girl at a boxing match he's reporting, whom he doesn’t realize is also Russian until she tells him (one senses Chap B isn’t very good at accents). This is rather like Nina Lecerf/Rechnoy in Nabokov’s The Real Life of Sebastian Knight - a book which resonates with Alexander Wolf on several levels - whose Russian identity is only betrayed to the narrator by a trick involving an imaginary spider on her neck. Meanwhile, in a Russian restaurant, Chap B falls in with a garrulous exile called Voznesensky, who retells the events of the original  shooting from yet a third perspective, that of ‘Sasha Wolf’s’ anarchist comrade-in-arms. Chap B's relationship with the girl, Elena, becomes passionate, although she admits she’s in hiding from a former lover who almost drove her to suicide through morphine and nihilism. She also admits that she likes our narrator because he’s the emotional antithesis of her ex. Voznesensky, unaware of Chap B’s role in Sasha Wolf’s near-demise, introduces the two men – and the narrator confesses his role in their shared history to the pale, reserved, elegantly funereal Alexander Wolf. A peculiar confidence develops between the two men; Wolf admits he’s come to Paris to solve a ‘complex psychological problem’ by, if necessary, ‘destroying’ its cause. The denouement, as abrupt as it is predictable, is artificially delayed by a non sequitur straight out of the film noir genre: Chap B witnesses a dangerous criminal shot to death by les flics.

Alexander Wolf is perhaps the least organized of Gazdanov’s novels because it strives to embody them all: the social history of Night Roads, the Parisian roman and émigré nostalgia of An Evening with Claire, the absurdity of The Buddha’s Return, even the tragicomedy of Pilgrims. Neither its barely coherent heterogeneity nor its abuse of happenstance have prevented me from loving this book. There is even a particular Russian restaurant on Oxford’s Cowley Road where I like to imagine a modern-day Voznesensky might sit, flirting with the waitresses, sluicing vodka with a generous hand, and recounting Crimean derring-do with his old pal Sasha Wolf. The Guardian critic, Nicholas Lezard, felt the same way when he read the Pushkin Press edition, calling it a 'masterpiece' that 'will stay with you for the rest of your life'.

Hence I approached Bryan Karetnyk’s new translation with the trepidation one always feels when one has taken prior ownership of an artwork. And, as usually happens, I was mildly disappointed. Karetnyk has done an extremely thorough job (he had to cope with блатный Parisian argot as well as Gazdanov's rolling clause structures), and I cannot fault him for accuracy nor, in the majority of cases, for style. He should also be praised simply for returning a neglected postwar minor classic to currency (as a translator of even more obscure Russian writers, I appreciate the work of others in the field!). But I felt that all too often for my taste, Karetnyk became hypnotized - for want of a better word - by Gazdanov's complex syntax. Instead of using transposition or modulation to simplify the sentence structures, Karetnyk tended to produce something either still more involved or more wooden-sounding than the original. For example, take this passage immediately following the opening sentence:

Ever since the moment it happened, I cannot remember one day passing when I haven't regretted it. No punishment for it ever threatened me, because it occurred in the most exceptional of circumstances and it was clear that I couldn't have acted otherwise. Moreover, no one other than I knew about it.


The tone of the original is stiffly declarative, like a formal deposition. Why, then, enhance the rigidity with slightly awkward units like 'one day passing' rather than 'a single day', 'no one other than I' for 'no-one else/no-one but me', and the 'of' in 'most exceptional of circumstances'? I found multiple similar instances where Karetnyk voluntarily lengthened or formalized Gazdanov's lexical structures . Similarly, conversation, although generally quite true to register, sometimes seemed unduly leaden. Here's Yelena barging in on the narrator in the latter's Parisian garret:

"Hello", she said, looking around the room where I was working. "I wanted to catch you unawares and, perhaps, in another woman's embrace."

The Russian mixes the colloquial (врасплох) with the archly high-toned (в чьих-нибудь объятиях); the English, to my ear, feels to match this playfulness. The three units of Yelena's raillery - 'catch you unawares', 'perhaps', and 'in another woman's embrace' - sound overly formal and somewhat unnatural. Too often, I feel, we tolerate and even praise translations that never quite settle into an equivalent narrative 'voice' in the target language, like an instrument that's slightly out of key. We assume that all foreign authors write English with an accent, and we silently make allowances for their 'handicap' (the way nineteenth-century readers had to accept that Tolstoy, Turgenev and Dostoevsky all wrote fluent Constance Garnett). Karetnyk's translation falls victim to this tendency, albeit occasionally and unevenly - and to do Karetnyk credit, in many cases he is simply exposing the occasional turgidity (dare I say it?) of Gazdanov's prose. Here's a 'naughty' bit that's a particularly good example:

She could never be called - at least as far as I'm concerned - an excellent lover; her physical reactions were sluggish, and the final seconds of embrace frequently caused her to experience some sort of internal pain; next her eyes would close and her face would involuntarily grimace.

(Hmmm - I think that's called an orgasm). This sort of bemusedly clinical approach to female sexuality, and female behaviour generally, is common among twentieth-century male authors voiced by male narrators (C.P. Snow's Strangers and Brothers series is full of it, to give a random example). Far from blaming Karetnyk for the torpidity of those lines, he should be hailed for refusing to translate объятий (here 'embrace') as 'congress'. That would just be too much seventies sex manual. Forget Alexander - let's hope the spectre of Naomi Wolf never catches up with Gazdanov in the afterlife.

Posted by Russian Dinosaur at 16:54