A translator's tale: Part One

In After Babel, his monumental study of translation theory, George Steiner reminds us that the complete interpretation of any text by any critic is 'both a linguistic and an emotive act' where 'two principal movements of spirit conjoin'. Translators face an even steeper challenge. Neither encyclopaedic biographical knowledge of the original author nor exhaustive hermeneutic de-encryption of the original text replace that happy spiritual connection which Steiner calls 'the sum of insight, the intuitive thrust to the centre'. When I chose to start translating for love, rather than for money (departing from previous one-off, indifferently lucrative commissions), I implicitly believed I could make that 'intuitive thrust' to my translatee's original dreamscape. I began by translating Aleksandr Chaianov, an obscure Russian agronomist who wrote and published, between 1918 and 1928, five Gothic-fantastic short stories and one science fiction novel. The quintet of tales had never been translated into any language, probably because Chaianov was tried in the early thirties and executed as an anti-government conspirator in 1937; his work was, consequently, suppressed. I had stumbled on his fiction while doing  PhD research on the Russian twentieth-century Gothic (a story for another day). As I scrolled down the first pages of Venediktov on lib.ru, I realized ecstatically that my thesis - which had begun seeming rather spectral - was now assured by the mere existence of these outré, overblown, audaciously otiose stories - loyally and lovingly written in the best tradition of European Gothic-fantastic. They appeared under a pseudonym - Botanist X - that possibly harked back to one of E.T.A. Hoffmann's tales, and Chaianov's earliest story, The Hairdresser's Mannequin (1918), was explicitly dedicated to Hoffmann. A highlight of the first year of my PhD was perusing the Penguin translation of Hoffmann's selected tales in the walled garden of a university library, silently entranced by a book I couldn't even borrow: the Sandman, the mines of Falun, Mademoiselle de Scudéri. Chaianov loved this legacy too. This was my kind of writer.

Like Steiner, Chaianov was a polymath and something of a polyglot, and during the early years of Soviet rule, protected by Lenin and later Bukharin, he had been able to travel abroad as a member of a commission on agricultural reform. He lived in Berlin in the early 1920s with his family. In the summer of 2009, I sat at a cafe table in Berlin, under a colourful awning in a district still favoured by émigré Russians. Slowly sinking a tall Eis-Kaffee, I started translating one of Chaianov's tales, the third in chronological order - The Venetian Mirror. I wrote roughly, without a dictionary, scrawling faster and faster. I was convinced I was channeling Chaianov's own drifting mind as he'd worked in Berlin ninety years previously, fantasizing about Venetian sunlight. I was re-entering the writer's world via the Berlin sidewalk, coming up in the cellar of a Venetian antiquary with the canal sparkling outside the windows, surrounded by baroque cupids and Florentine tables, about to meet my own gaze in a haunted mirror. The hero buys the haunted mirror and brings it home to Moscow, only to have his reflection take over his life and destroy his beloved. The story flowed: 'Afterwards, Aleksey never could explain his mirror experiences to his friends using the ordinary ideas and images of our world. What’s more, his badly shaken mind retained almost no recollection of the days just before his terrifying adventure in the mirror.' If only I had checked the last line of the story: The Venetian Mirror was actually written in London, during Chaianov's posting there in 1922. So much for the sum of insight; I couldn't even get my dates right.

Yet insight, however delusional, is vital. Without that sense of (misguided) affinity, without that imaginative quickening and the sense of appreciation and gratitude I bore for Chaianov, his stories would still be seeking a translator. But I found the tasks of actual translation to be strictly practical. My initial ambition to publish all five stories in a discrete volume foundered on the pragmatism of the publishing industry. The first firm I approached with my proposal, a mainstream medium-sized press, turned me down. The second turned me down but forgot to tell me. After three wasted months I wrote to them again; I used this lacuna to guilt-trip the manager into recommending a press which might welcome my idea. He suggested Angel Classics - a one-man London-based firm that produces new translations of not-so-esoteric prose and poetry by Russian and German writers from Andrei Bely to Georg Heym that have slipped, temporarily and undeservedly, under the Anglophone cultural radar. I wrote to Angel, and the rest is history. The editor gently disillusioned me about bringing our a Chaianov-only volume: it wouldn't sell. Instead, with the help of Angel's external reader, we chose eleven stories by a mixture of high-profile writers and unknowns: Bulgakov, Briusov, Krzhizhanovskii, Pavel Perov, Georgii Peskov, and three by Chaianov himself. I found an elusively sinister cover illustration by the Symbolist artist Nikolai Feofilaktov.  Finally I chose a title, too: Red Spectres. In my next two posts, I'll describe the experience of translating these eleven tales and why I chose the Gothic-fantastic genre (that is, the ghost story).

I did stumble, after all, into Chaianov's imaginary. Not in Berlin, nor in Venice, nor even London. The donkey work of translation was behind me; I'd just seen the first galleys from Red Spectres's American publisher, Overlook. On a street corner in New Orleans's French Quarter, between drifts of blowsy yellow bougainvillea and overhanging Boston fern, I found an antique shop cluttered with ornate bric-à-brac, including a compellingly OTT oil of two wrestling cupids in a densely wrought gilt frame. Dust contended with kitsch in every crowded corner and aisle: velvet, brass, redwood, teak and gilding sparkled in the gloom. The owner lacked the ingratiating qualities of his Venetian equivalent: judging from his sour monosyllables, his irritation seemed to be increasing as a function of tz (where t=time customer spends in store, and z=objects not purchased). In the very back of the store, where progress was constricted by junk, I caught someone's eye in a tall, broad mirror with an oak-leaf frame. I looked and looked again: but every time, the same strange woman was staring back at me. 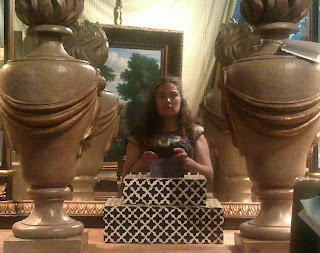 Posted by Russian Dinosaur at 09:32