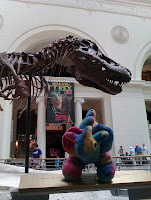 I spent part of July in America catching up with old friends - a couple of them like to hang out in Chicago's Field Museum - and also fleeing the Slavic side of my life, or so I persuaded myself, in Estes Park, Colorado. I approve of Colorado - it actually has a town called Dinosaur - which, I'm assured, boasts street names like Brontosaurus Boulevard, Stegosaurus Freeway, and Triceratops Terrace.
However, after settling down in Estes Park, I experienced a suspicious feeling of deja vu - and an unfamiliar longing to lumber after local lepidoptera. When I looked at the landscape, I wanted to say things like, 'In the distance, fleeting cloud shadows dappled the dull green of slopes above timber line, and the gray and white of Longs Peak'; and I had the oddest idea that I could fly on a magic carpet to the marshland around Vyra, near St Petersburg.
Finally, it clicked. Far from escaping Slavonic studies, I had merely succeeded in trailing Vladimir, Vera, and Dmitrii Nabokov on their 1947 holiday to Estes Park, where they stayed at Columbine Lodge - just inside the boundary of the Rocky Mountain National Park - a place where Nabokov could imagine it was possible to fold time and space like a magic carpet and, pursuing a fritillary through the Russian marshes in 1910, somehow find himself in the Midwest forty years later. The Nabokovs' holiday was funded by the publisher's fee for Bend Sinister, and it abounded in both entomological enthusiasm and more literary 'rushes of excitement', as Brian Boyd describes them. Here fourteen-year-old Dmitrii climbed mountains (including Longs Peak), while Nabokov chased butterflies and worked simultaneously on two books: the memoir that would become Conclusive Evidence (and later, Speak, Memory) and The Kingdom By The Sea - which he would describe in a letter to Edmund Wilson as a 'short novel about a man who liked little girls'. He also learned how American collectors kill butterflies (I'll let you find out for yourselves). The summer of 1947 immediately preceded a turning-point in Nabokov's career: shortly after returning to the East Coast to resume teaching at Wellesley, he would be headhunted by Cornell as their next Professor of Russian Literature, replacing the Tolstoy scholar Ernest Simmons. Overall, the three-month holiday in the Rockies was so stimulating that three years later Nabokov would return to The Kingdom By The Sea - soon to become Lolita - in the hope of funding a second trip there. (For an illustrated timeline of Nabokov's American road trips, see here).
In my next international adventure, I'll be pursuing not Nabokovian butterflies but Tolstoyan birches - all the way to Yasnaya Polyana. The Tolstoy bus leaves Moscow on Saturday morning this week. So far I have learned that the bus is blue and that the driver's name is Vanya. What more could any dedicated Russophile wish to know? As that great Tolstoyan, Jim Morrison, crooned,
The blue bus is callin' us...
C'mon baby take a chance with us
And meet me at the back of the blue bus...
which is almost certainly a free adaptation of Lev Nikolaevich's proposal to Sofia Andreevna Behrs in 1862, and practically identical with the small print at the bottom of my conference timetable.

Posted by Russian Dinosaur at 19:56