Kukryniksy, or Let's Defeat and Annihilate The Enemy! 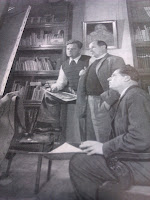 I have a soft spot for Russian caricaturists (I'm a big fan of P.M. Boklevskii, for example, and I wish I'd been less stingy when I once had a chance to buy a pack of Boklevskii postcards), and the Kukryniksy - once I resigned myself to the difficulty of spelling their ludicrous name - are among my favourites. Here they are in respectable middle age: Mikhail Kupriianov (far left), known in youth for his round classes, bushy hair, and Left Bank swagger; diminutive Porfirii Krylov (middle), who always looked like a grocer's apprentice, and the latecomer Nikolai Sokolov (seated right) with the round-eyed, faraway stare of a saint. The trio met in the early 1920s at VKhUTEMAS, the newly founded Moscow art college where Ekster, Popova, and Rodchenko were all then teaching, and by 1924 they had merged their three names into a quadrisyllabic byline that sounds like a barnyard cackle: KU-KRY-NIK(olai)+S(okolov)+ Y for plural: literally, the Kukrynikses. Who didn't they caricature? Hitler, Mussolini, each other, national stereotypes, Gorky, Meyerholdt, Marshak... Who didn't they illustrate? Most famously, Chekhov's collected short stories, Cervantes's Don Quixote, Gorky's Mother and Klim Sangin. 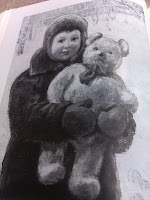 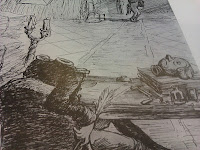 They could render sentimental or stirring scenes, as well as lyrical landscapes, but their unique gift for the darkly and self-mockingly grotesque gleams through the grimy chiaroscuro of their illustrations for collected editions of Gogol and Saltykov-Shchedrin. Then heads would roll...

Their enduring success brought them wealth and trips abroad (working

individually, they produced an extraordinary number of delicate and chocolate-boxy views of French and Italian cities) after the war, but they earned this Elysian security by the unimpeachable verve of their propaganda drawings, much used to spur on the Russian war effort. From this sort of thing 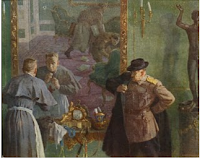 (a mocking look at Kerensky climbing into his disguise prior to fleeing the Winter Palace in October 1917) to this shortly-to-be-bayoneted Adolf, above right (with the wonderful slogan, Let's Mercilessly Defeat and Annihilate the Enemy).

Some of their work is oddly politically relevant today (like this Iranian oil-goat), and some of it is still deliciously irreverent (like this mockery of Dali). 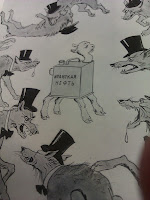 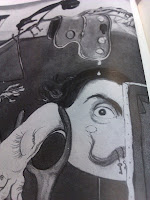 "Working collectively greatly strengthened our friendship," wrote the Kukryniksy in a (predictably) collectively authored article in the 1975 commemorative volume Kukryniksy: Vtroem [The Kukryniksy: Band of Three]. "Each of the three of us takes care of his own development, but none of us, working alone, could outshine what we create collectively. In our collective, besides Kupriianov, Krylov, and Sokolov, there's a fourth artist, the one we care about most: Kukryniksy. We know that's he's just as essential to us as we are to him. And that's our good fortune."

Posted by Russian Dinosaur at 16:37