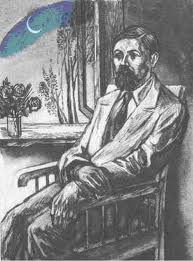 Readers of this previous blog post on Dmitrii Mamin-Sibiriak, the Siberian writer, will be aware that one of my students wrote a very interesting research project on him earlier this year. I asked him if he would be willing to publish a précis of this project here, both to raise awareness of Mamin-Sibiriak's stature and to delight those of you who already admire this neglected author. And here it is. David Ellard, today's guest blogger, is already my former student. He completed a degree in History and Russian at Oxford earlier this month.
Dmitry Narkisovich Mamin-Sibiriak can only be considered one of the leading figures in the literary history of Siberia. Despite the great popularity of his works during his own lifetime, Mamin-Sibiriak fell into obscurity during the Soviet period: the attempts of Stalin-era critics to examine their content in a purely revolutionary light could not be reconciled with the author’s devotion to his native Urals. At present only one of his works – the short story Серая шейка (Little Grey Neck) – survives in the Russian school curriculum; many Russians are also familiar with the мультик (or cartoon) inspired by the story. Large numbers of towns in the former Soviet Union were named after this writer, and still bear his name, while two museums devoted to him continue research and display his manuscripts in his native Ekaterinburg.
Mamin-Sibiriak’s works include Приваловские миллионы, a novel which has been translated as The Privalov Fortune and which I have particularly enjoyed studying; it is among the most daring satires of nineteenth-century Russian life, and I could justify reading it on the basis of its unusual brand of  proto-feminism alone. Mamin-Sibiriak’s gentle writing style led him to become a highly skilled writer of childrens’ fiction; the Аленушкины сказки (Alena’s Fairytales) are the best example of this. This author also produced a large body of short stories with a focus on moral questions; some of the best of them are comparable to Chekhov’s work, but from a different cultural and psychological space.
As such, Mamin-Sibiriak’s works – despite their flaws – present a certain contrast to the works of other, more well-known writers, most of whom lived much closer to St. Petersburg. This contrast is not just a question of the settings used in an author’s fiction. In such a large and diverse territory as the Russian Empire there was scope for “provincial” literary movements to develop, and for scholars to subsequently ignore this diversity inevitably distorts our picture of Russian literature. Mamin-Sibiriak himself was an author not just of fiction, but of radical journalism; he aligned himself with a tendency known as областничество (oblastnichestvo), a proto-secessionist worldview seeing Siberia as a separate entity from European Russia. His works are therefore of genuine importance to historians, while reminding the general reader of the fundamental diversity of Russian literature.
Works of politically- or socially-inspired fiction can give us an understanding not just of their authors, but also of their readers. I have already mentioned Mamin-Sibiriak’s popularity in his lifetime; in his diaries Chekhov records his surprise to discover on his way to Sakhalin that in the Urals Mamin-Sibiriak had eclipsed even Tolstoy. Mamin-Sibiriak’s concern for the peasantry, his interest in the moral aspects of industrial development in the Urals, and his interest in personal spiritual redemption tell us not only about the author’s own attitudes. They can also illuminate the attitudes of his readers; in this sense, the creation of literature should not be seen as a linear process of an author passing meaning on to his readers. Literature can only be circular, as there is a constant mutual exchange of material between author and reader.
Why is it necessary to continue research into such writers? If a writer has fallen into shadow, why should scholars attempt to resuscitate them? This is a complicated question and could be answered at much greater length, so this article will not attempt to resolve it completely. It is clear that students of History or Literature should find a balance between analysing material which is already available, and finding and presenting hitherto lost or forgotten material. We can compare knowledge to a body of water – in a pond, with no streams flowing into or out of it, the water becomes stagnant and opaque, yet in a fast-flowing river the water will be more clear. Therefore even today there is good reason for scholars of Russian literature to search-out little-studied or forgotten writers.
Finally, I would suggest that this moment is an appropriate time to carry out such an activity. Authors such as Mamin-Sibiriak, who were examined by Soviet and modern Russian critics and literary historians, have been ignored in the West largely because of the restrictions on information exchange between the Soviet Union and the English-speaking world. In the municipal library of the city where I carried out my research a two-inch thick stack of index cards catalogues works devoted to Mamin-Sibiriak; in a year spent researching this author in the UK I was unable to find a single journal article discussing his works. There can be no doubt that there are many other Russian authors who show such an imbalance; if we are serious about studying Russian literature, this is something we should strive to correct.

Posted by Russian Dinosaur at 10:53