Sailing, or Tiutchev in the Octopus's Garden

At the risk of misquoting Jerome K. Jerome, this post will be about three men in three different boats, in three different poems. Taken together, these poems offer distinct perspectives on the Romantic concept of freedom. The earliest is Mikhail Lermontov's famous 'The Sail' (Парус) (1832):

A white sail gleams
On the ocean's steel-blue spume!...
What does it seek in a distant land?
What has it left at home?...
Lermontov's tiny poem (just three quatrains) has become one of the most cited and pastiched verses in Russian literature. It is almost impossible to convey in English the extraordinarily evocative spatio-kinetic effects of the young poet's language: the stressed long vowels in words like 'одинокой','тумане', 'ищет', and 'далекой' emphasize the breadth of the horizon and the emptiness of the seascape; the Russian colour 'голубой', the hue of a summer sky, is poorly but traditionally translated as 'pale blue'; the unexpected juxtaposition of this bright, rich colour with 'туман' (fog) forces the reader to visualize the dazzling dimness of spray interacting with sunlight; in the last line,  the verb 'кинуть' (to throw'), although not as emphatic as бросить ('to throw over, abandon'), stresses the energy and decisiveness of the sailor's departure from his home. 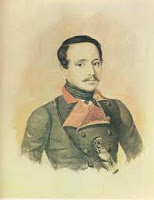 With an eighteen-year-old's characteristic cruelty, Lermontov makes it clear in the next stanza that his sailor-hero has already suffered misfortune and has lost faith in the possibility of happiness: 'Увы! он счастия не ищет,/И не от счастия бежит!' ('Alas! It does not search for joy/Nor is it joy it flees!'). In the final lines of the poem, it becomes clear that this disenchantment has formed into a philosophy of living: 'А он, мятежный, просит бури,/ Как будто в бурях есть покой!' ('But rebelliously, it calls for storms/As if in storms peace could be found!'). It is not clear whether Lermontov is endorsing or ironizing this Byronic infatuation with tempestuous travel; probably, given his age and future career, the former. The Third Witch's incantation in Macbeth springs to mind: 'Though his bark cannot be lost,/Yet it shall be tempest-tost'. Sadly, Lermontov's own bark would be lost nine years later - not at sea, but in a pointless duel.

Both the sea and the storm rocked our skiff;
Sleepy, I was abandoned to the full caprice of the waves.
The two infinities were within me
And willfully they played with me. 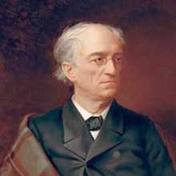 Where Lermontov erects a sequence of screens (the distant sail is metonymous with the unnamed sailor-hero, and all emotion is focalized though the narrator on the shore), Tiutchev brings us directly on board, into the midst of the swell and spray. As the storm continues to rock the poet's craft, he takes the reader deeper into his own mind. The poem takes the form of a sonnet (14 lines) sandwiched between two quatrains; the first quatrain introduces the sleepy poet lying in the bottom of his boat (and not a glamorous sailboat this time: the word 'челн' evokes for the modern reader the 'sorry skiff' or 'бедный чёлн' of the miserable native Finns in Pushkin's 1833 poem The Bronze Horseman). In the first six lines, or sestet, of the quatrain, the poet's dream ('сон') gradually overcomes the 'хаосом звуков' ('chaos of sounds') enveloping the boat. In the octet, the poet experiences a vision that would have done McCartney and Lennon (circa 1967) proud: he sees 'Labyrinthine gardens, palaces, columns,/... magic creatures, mysterious birds./Across the peaks of creation I strode like a god,/And under me the world shone motionless'. The poet has achieved a qualified divinity: most importantly, he has imposed his own 'motionlessness' upon the restlessness of the sea. However, this apotheosis is transient. In the concluding quatrain, the real world pours in upon the poet: 'But through all the dreams, like the wail of a magician,/I heard the roar of the ocean's abyss,/And into the quiet domain of visions and dreams/Burst the foam of roaring waves'. Is the sea resisting or colluding with the poet's self-enchantment?

Whether this poem is influenced chiefly by Schelling or by Pascal, whether it celebrates the power of the human imagination to transform and control nature, or whether it dramatizes man's precarious position between two 'abysses' - imagination and the natural world - it constitutes a powerful late Romantic speculation on the nature and limits of creativity. Tiutchev, a youthful diplomat posted to Munich at the time of writing, had yet to experience the unhappy love affairs that would stimulate his most moving love poetry. In 1865, aged 63, he would return to the sea as a metaphor for nature's innate harmony in the tragic 'Певучесть есть в морских волнах' ('How tuneful is the voice of the sea'). Here, man is a 'мыслящий тростник' ('a thinking reed', in Pascal's phrase). The aged poet laments man's permanent isolation from the natural chorus: '... отчего же в общем хоре/Душа не то поет, что, море' ('Why, in the world's chorus/Cannot the soul sing like the sea')?

My final poet in a boat is Evgenii Baratynskii, whose poem 'The Steamship' (Пироскаф, 1844) was written on (and about) the Mediterranean while sailing from Marseilles to Naples. The poem is set on board a ship powered by both sail and steam, creating a fusion of power that both thrills and slightly unnerves the poet. Here is the first stanza, and the first word of the second:

Full of wild and fierce affection,
The waves of the inland sea strike our vessel.
There, the captain's appeared in the stern:
His whistle rings out. In league with the steam,
The wind purposefully unfurls our sail:
The ocean exhales a gout of foam!
We rush onwards.

'The Steamship' is the longest (at 36 lines) as well as the latest of the three poems discussed here, and also the most populous (the poet-narrator in the midst of the action, the captain, the sailors, the flapping sail and churning paddles of the boat, the gulls and waves associated with the sea, other boats!). The poets are getting progressively older: Baratynskii is 44 at the time of writing, reflecting on a life saddened by (not entirely undeserved) disgrace and (unjust) critical neglect, but also palpably quickened by the European tour he was undertaking with his wife and children. Although troubled by his wife's poor health, his hopes for the future have reached a high pitch. The overriding optimism of the poem reflects this. We can find echoes of both Lermontov and Tiutchev: like Tiutchev, the poet is slipping into a maritime reverie, but his visions of the past and future resonate (rather than competing) with the sounds and motion of the sea. Like Lermontov, he is conscious of the Romantic truism of finding (not necessarily happy) fulfillment through travel and adventure ('Since childhood I have been lured by my troubled heart/Into the free nation of the aqueous god'). However, this trip is not a surrender to the random direction of current and breeze, but a consolidation of rational decisions already made: ('I decided many tumultuous questions./Before ever the hands of the Marseilles sailors/Lifted our anchor, that symbol of hope!'). As my colleague Andrew Kahn stressed in an inspiring 2010 seminar, this poem deflates the heroism of the Romantic wanderer while dismantling an important Romantic topos: here, the hero's fate is decided before he sets out. The Romantic ideals of freedom and realized imagination are not abandoned, but revised in light of experience. Baratynskii's mood of hope and potential achievement is consonant with, but independent of, the playful grandeur of the sea. In the final lines, he looks forward to specific goals: 'Tomorrow I will see the towers of Livorno/Tomorrow I will see Elysia on earth'! Unfortunately, in an unconscious irony, Baratynskii would die of heart failure, aggravated by fever, a very few days after landing in Naples. This poem is one of his last. Baratynskii's hopes for the future were thus tragically delusive (Andrew Kahn confesses that this poem always chokes him up). 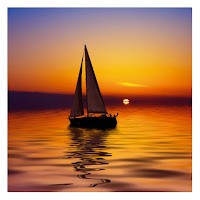 All together for a chorus of Rod Stewart's 'Sailing' (quite a typically Romantic lyric, in its way):