Ekphrasis and Epilepsy in Dostoevsky's life and fiction

Fedor Dostoevsky's fiction, like his life, was punctuated by moments of ecstasy. Indeed, according to one article, even Dostoevsky's epilepsy was ecstatic in character: its current medical definition is 'Temporal Lobe Epilepsy with Ecstatic Seizures'. Many epileptics describe the 'aura' - the period of mental confusion immediately preceding a seizure - as producing a sensation of clarity or wellbeing. Dostoevsky was no exception. As attested by his own records and those of his second wife Anna Grigorievna, Dostoevsky had - on average - one fit every three weeks between the onset of epileptic seizures in his mid-twenties and his death, aged sixty, in 1881. Sometimes these fits were provoked by overwork, sometimes by emotional stress (he suffered severe, repeated seizures immediately after both of his marriages), and sometimes they had no obvious trigger. Dostoevsky's friend, the critic Nikolai Strakhov, famously described the onset of one such fit: '[Dostoevsky] called in on me very late, after ten o’clock, and we had a very lively conversation […] Fedor Mikhailovich grew very animated and was pacing about the room, while I sat at my desk. He was speaking of something very elevated and joyous [высокое и радостное]; when I made some remark of agreement he turned to me with an inspired face which revealed that exaltation [одушевление] had reached its peak. He paused for a moment as if groping for words to express his thought, his mouth already open. I looked at him in strained expectation, sensing that he would say something extraordinary and that I would hear some revelation […] Fedor Mikhailovich told me many times that he would have moments of exaltation before a fit. “For a few brief moments", he would say, “I feel a kind of happiness that is unthinkable in a normal state and which is unimaginable for other people. I feel complete harmony with myself and with the whole world, and this sensation is so powerful and sweet that one would give ten years of life, perhaps one’s whole life, for a few seconds of such bliss”’ [The Dostoevsky Encyclopedia, ed. by Kenneth Lantz (2004), p.200]. Another friend recalled that Dostoevsky had described this harmonic sensation less innocently as 'сладострастие', which is closer to 'voluptuousness' than 'bliss'. Many of Dostoevsky's fictional characters share this medical condition: Kirillov in The Devils and Smerdyakov in The Brothers Karamazov, for example. The hero of The Idiot, the mild and Christlike Prince Myshkin, suffers three clearly defined epileptic seizures during the course of the plot, the last of which plunges him back into the helpless, irrational 'idiocy' of his childhood. Myshkin's first seizure is preceded by a sensation of oppression and guilt; his second, on the contrary, by a new (and misleading) feeling of acceptance and trust among members of St Petersburg 'high society'. On display by his hosts the Yepanchins as a potential son-in-law, Myshkin tries to find common ground with a selection of dessicated grandes dames and high-ranking civil servants; naively mistaking tolerance for sympathy, he breaks into an ecstatic eulogy: '"Do you know I don't know how one can walk past a tree and not be happy at the sight of it? How can one talk to a man and not be happy in loving him! Oh, it's only that I'm not able to express it... And what beautiful things there are at every step, that even the most hopeless man must feel to be beautiful! Look at a child! Look at God's sunrise! Look at the grass, how it grows! Look at the eyes that gaze at you and love you!"'. Unfortunately, on this pinnacle of ecstatic communion, the Prince topples over into a humiliating - and silencing - seizure. The harmony experienced in epilepsy was clearly unreliable, transient, and - worst of all - impossible to share with others. Yet this frustration did not lead Dostoevsky or his characters to renounce the clarity gained during the aura; Catteau even suggests that 'Dostoevsky may have mythologized the aura so as to experience a transcendence which he could not reach by other means' (Dostoevsky and the Process of Literary Creation, 1989, p. 125). 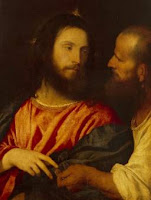 However, epilepsy was not the only conduit for ecstasy in Dostoevsky's life. During the four years he and Anna Grigorievna spent wandering through Europe (not an extended honeymoon, but a prolonged avoidance of creditors at home in Russia), Dostoevsky found a new ecstatic connection: with the Great Masters. As the Dostoevsky scholar Jacques Catteau admits, Dostoevsky's appreciation of art was neither adventurous nor profound; he was capable of confounding the relatively trivial or unoriginal (Watteau, Battoni) with the timeless (Rembrandt, Titian). However, his most spontaneous admiration was commanded by truly eternal masterpieces: Titian's The Tribute Money and Raphael's The Sistine Madonna. Anna Grigorievna has left us a vivid account of Dostoevsky's enjoyment of these works at the Gemaldegalerie in Dresden : 'Passing by all the other halls, my husband led me up to the Sistine Madonna - a painting which he held to be the highest manifestation of human genius. Subsequently, I was to see how my husband could stand for hours in front of this strikingly beautiful painting, deeply moved and affected'. She added that she had the startling impression that the Madonna was flying upwards from the canvas to greet her visitors. In another account of their first sight of Raphael's painting, Anna Grigorievna wrote: 'What beauty, what innocence and sadness in that divine face, how much humility, how much suffering in those eyes! Fedya finds that her smile is sorrowful' [both passages are my own translation]. (And yes, for the record, she did like those ubiquitous Dresden cupids at the bottom of the painting; Dostoevsky's reaction to them is not known). At the Kunstsammlung in Basel (the city's collection had not yet removed to the present-day Kunstmuseum), Dostoevsky saw Hans Holbein the Younger's image, The Dead Christ in the Tomb (1521), which would affect him differently but equally profoundly.

Dostoevsky's emotional engagement with art brings us to ekphrasis, a term used in Greek and Roman schools of oratory to describe the skill of creating a picture in words; as a modern critical term, it refers to the description of an artwork in literature. Dostoevsky's major novels abound in ekphrasis: not only does he describe works of great art, he uses their description or invocation as short-cuts to achieve insight or arouse emotion. In The Idiot, for example, a reproduction of Holbein's Dead Christ transfixes several characters with horrified fascination: it is a painting that might make a man lose his faith, as Prince Myshkin remarks. Conversely, in several of the novels but most prominently in The Devils, Raphael's Sistine Madonna becomes a rallying-cry for art as an eternal value: as the mildly ridiculous but sincerely idealistic Stepan Trofimovich challenges a cynical crowd, '"...which is more beautiful, Shakespeare or boots, Raphael or petroleum? [...] Shakespeare and Raphael are more precious than the emancipation of the serfs, more precious than Nationalism, more precious than Socialism, more precious than the young generation, more precious than chemistry, more precious than almost all humanity because they are the fruit, the real fruit of all humanity and perhaps the highest fruit that can be.'" To Stepan Trofimovich, the Sistine Madonna symbolizes not only of the purity of art, but also the best that mankind can achieve. He's forced by his rowdy audience to over-simplify his point: what he really wants to say (and what Dostoevsky believes) is not that Raphael's painting is more important than petroleum or, indeed, the emancipation of the serfs, but that it is differently important. The provision of boots and petroleum and the freeing of slaves are all steps towards a goal where all of mankind will perceive, perpetuate and even enact the spiritual values expressed in the painting. Conversely, Dostoevsky exposes a negative, shallow character by her reaction to the Sistine Madonna: '"I spent two hours sitting before that picture and came away utterly disillusioned. I could make nothing of it and was in complete amazement [...] All its fame is just the talk of the last generation"'. Politically, Dostoevsky had little in common with Stepan Trofimovich, but a decade before writing The Devils, he had used similar arguments to defend the independence of aesthetic values from politics in his 1861 article Mr -bov and the Problem of Art. (Susanne Fusso has  a great article on this subject in Slavic Review).

In his excellent book on Dostoevsky's aesthetics, Dostoevsky's Quest for Form (1966), Robert Louis Jackson points out that throughout his entire career, Dostoevsky was preoccupied by a search for a consistent aesthetic form - part style, part philosophy, part theme - that would make his literary achievements consistent and unitary. Jackson points out that when Prince Myshkin, in The Idiot, repeatedly apologizes for his lack of form - that is, his failure to speak or think coherently, or behave with the expected suavity of a nobleman - he is expressing Dostoevsky's fear of compromising his own ideas through flawed expression (Jackson, 'Introduction'). Myshkin's epilepsy may therefore not be just an autobiographical echo but an elaborate metonym of narrative incoherence. In The Devils, Stepan Trofimovich's polemic with his increasingly riotous audience is another parable of aesthetic fragmentation: his message is betrayed by the messenger. In contrast, Dostoevsky's use of ekphrasis - the careful reconstruction of artworks within his text - is a reassertion of form. The writer's form emerges in the skill with which the image is described; the message is encoded in the image - a perfect form, because Platonic - and shared by the writer, the reader, and the characters in the narrative. Holbein's dead Christ, described in sadistic detail by the consumptive Ippolit, challenges everyone's faith in God (Ippolit's monologue is a precursor to the Grand Inquisitor parable in The Brothers Karamazov); Raphael's Madonna, flying upwards over her tormentors, eternally supersedes the need for petroleum or boots. 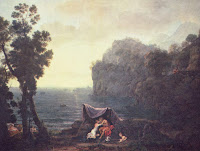 My contention, ultimately, is that ekphrasis was Dostoevsky's alternative route for reaching the state of ecstatic communion which epilepsy simultaneously afforded and denied to him. Crucially, ekphrasis offered the possibility of deliberately recreating and sharing such moments of insight, thereby overcoming the tragic isolation of individual consciousness. The obverse of ekphrasis was, to a limited and subjective extent, also true: the paintings that Dostoevsky saw with his young wife in Dresden, Venice, and Basel also prefigured the narratives of his novels: the idyllic pastoral 'Landscape with Acis and Galatea' by Claude Lorrain (1657), pictured right, inspired the characterization of Prince Myshkin.


All translations in this post, unless otherwise credited, are by Constance Garnett.


Dostoevsky and the Healing Art: An Essay in Literary and Medical History

Dostoevsky's quest for form: A study of his philosophy of art (Physsardt publications in literature ; 2)

Posted by Russian Dinosaur at 00:04 2 comments: